The February results again confirm that Arlington is by no means a “stand out” amongst its neighboring towns as Baron suggested in his email and, in fact, is following along on a path wholly consistent with the trend seen in the county, state, region and nation.

As I had shown in my prior posts, this data when charted and compared to other towns in the region proves there are absolutely no grounds to call Arlington’s market exceptional.

The most notable feature of the February results is unquestionably the low number of home sales with only nine sales this month and twenty one sales for January and February combined, the lowest readings since the recessionary period of 1991.

Another important point to remember is that when sales decline dramatically the median selling price can jump wildly up or down since the smaller number of sales provides a smaller set with which to determine the “middle” sale price.

The following chart (click for much larger version) shows a history of Arlington’s February median sales price since 1988 along with the annual outcome. Notice that although the latest result spiked up to a high of $526,000, the low sales count is clearly impacting the median price and February may end up being a little misleading as home sales pick up later this spring. 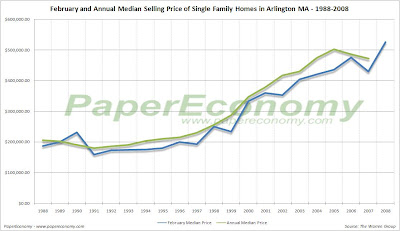 The next chart (click for much larger version) shows that home sales in Arlington have been essentially flat during the last 15 years, a result that is generally to be expected when looking only at the sales of one town in isolation. That being said though, Arlington only saw 9 home sales in February, the lowest result on record since February 1991. 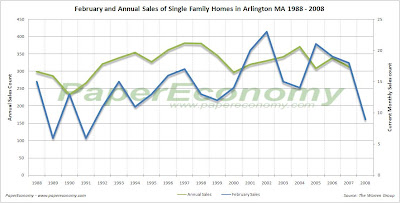 The final chart shows how the year-to-date median sales price for Arlington, Bedford, Belmont, Cambridge and Lexington has changed since 1988. Notice again that the one month median price data is very volatile jumping radically up or down for each of town. It’s important to note that each of the listed towns is seeing monthly home sales counts at or lower than the recessionary environments of the early 2000s and the early 1990s. 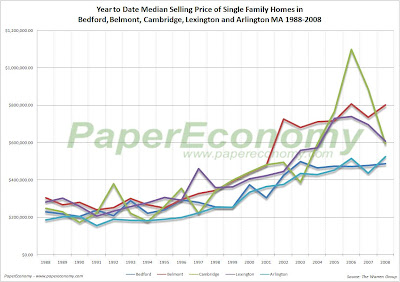 Please let editor Baron know what you think of this misstep.
Posted by SoldAtTheTop at 8:50 AM