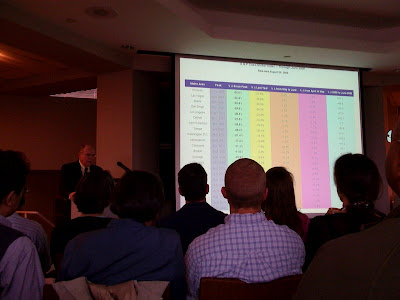 Yesterday afternoon I had the good fortune of attending an excellent lecture given by Professor Karl Case entitled “Housing Prices and the Current Fiscal Crisis: How Will the Market Clear?”

Better yet, joining me was none other than BostonBubble marking the first time that our respective blogging personas were de-virtualized into a bona fide “real world” get-together!

Professor Case’s lecture was thorough and complete and despite covering many of the items (utilizing the exact same slides) that he touched on when he penned for me a blog post back in August, his superb ability to communicate greatly enhanced the presentation.

As for his overall estimation of where housing may be headed, Professor Case was sure to remind the audience that there was no way of truly knowing and that although some of his key indicators, most notably the measures of gross residential investment together with housing starts, were indicating that the current decline has nearly reached levels reminiscent of past bottoms, there is no certainty that the current decline will play out in typical fashion.

In a particularly interesting moment at the outset of the presentation, Professor Case briefly mentioned in passing that he had recently noticed some extra seasonality in the Boston S&P/Case-Shiller series that he presumably had not initially fully recognized.

Later during the Q&A section of the lecture I wasted no time in asking him to elaborate on his findings of the Boston index.

He stated that he had been looking at the index and noticed that, in recent years, the seasonal pattern appears very strong, stronger in fact that during the 90s period, and that the recent monthly price increases for Boston could simply be following the trend of increasing prices during the spring selling months then declining during the fall and winter.

I followed up by asking him if he anticipated Boston prices falling from now until February inevitably reaching a new low for the area for which he essentially smiled a bit and suggested that we will have to wait and see.

There were many other very interesting points covered during the lecture and Q&A but suffice it to say that if all home buyers were privy to this quality of information (i.e. housing is cyclical, housing growth over the long term is generally consistent with income growth, it’s important to consider how a home’s “real” value changes not simply “nominal”, etc. etc.) prior to planning for their home purchase I can only imagine that better choices could be made.
Posted by SoldAtTheTop at 9:09 AM