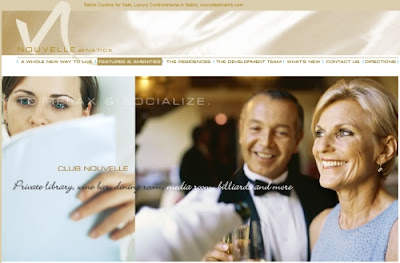 At the risk of sounding too blunt and negative I have to revisit the condo development at the Natick Mall in Natick Massachusetts as this condo development is apparently gaining more national attention and has now been covered in a recent New York Times article.

For those of you who hadn’t read my prior post on the project, the “Nouvelle at Natick” is a luxury condo building built right up against, and in fact actually attached to, the old Natick Mall… now revamped and renamed the “Natick Collection”.

In my last post I opined at great length about the truly odd circumstances of the “luxury” condo complex with its 215 units ranging in asking price from $439,900 for a one bedroom to $1,599,900 for a 2190 square foot “penthouse” and speculated that its mere existence may physically embody the sheer lunacy that came about from the Great Housing Bubble.

Now, it appears that I may not be alone in thinking that paying huge bucks for the privilege of living in a mall is unappealing.

According to the article, to date only 15% of the 215 units have actually gone under contract.

Furthermore, many of the current buyers signed those contracts as far back as the spring of 2005 so I would think that this is a clear indication that these units are not going anywhere, anytime soon.

Keep in mind that Boston’s luxury condo projects have been taking a serious beating these days with developments like the Harborview, built right on the Charlestown Navy Yard, going into foreclosure because they failed to sell any units … that’s the WHOLE BUILDING in foreclosure not individual units.

You have to wonder, if a builder can’t sell a luxury condo right on the water within Boston proper, how in the world are they going to move units that are attached to a suburban mall some 20 miles out of town.

How could the developer, General Growth Properties (NYSE:GGP) have gotten it so wrong?

What’s worse is that GGP paid huge sums of money and agreed to substantial affordable housing effort just to be allowed to do the project in the first place.

It’s been reported that not only did GGP pay the neighboring town of Framingham $1 million for renovations of highway and transportation facilities but they agreed to supply the wider community with 48 affordable housing units.

Now, before you get the idea that these affordable units are located somewhere within the “luxury” complex, think again.

Nothing could be farther from the truth.

It appears that GGP has purchased random condo, multi-family and single family housing units from around Natick with plans to sell them to qualified low income buyers at greatly reduced cost.

These sales will take place during December and January and will be carried out through the use of a common lottery system where winners get the opportunity to buy the low cost units.

Doesn’t this all sound a bit crazy?

Anyhow I’ll keep posting as future developments occur but for now, here is a promotional video clip about the “Nouvelle”… it should be worth a good watch!