Confirmation from Bernanke and Greenspan 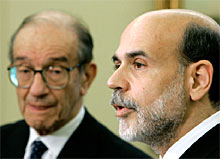 Today Federal Reserve Chairman Ben Bernanke stated that a cooling in the nation’s real estate market was “pretty clear”. Bernanke noted that "We're seeing slowing in sales, slowing in starts. There also seem to be signs that prices are not rising as quickly as they have been for the past few years,”

He went on to say “Our assessment at this point . . . is that this looks to be a very orderly and moderate kind of cooling, ”

Bernanke also noted that the Fed is concerned about the recent proliferation of non-traditional mortgage products such as adjustable rate and no money down mortgages noting that they accounted for 30 to 40 percent of new mortgages in 2005.

Then later in the eavning, while attending the Bond Market Association's 30th anniversary dinner, former Fed Chairman Alan Greenspan, referring to the real estate boom stated that "This has been quite an extraordinary boom," He went on to say "Home sales are off, applications are off, everything is going in the same direction. The boom is over, and you can say that with a fairly strong degree of confidence."

Posted by SoldAtTheTop at 2:35 PM