Three Strikes and Bernanke is OUT! 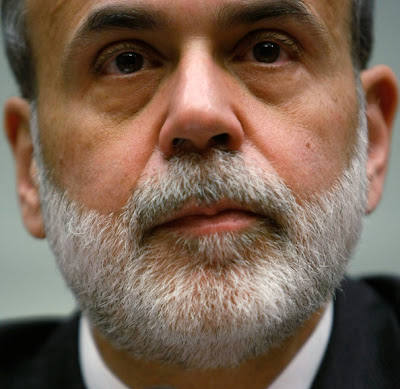 The “End the Fed” movement appears to be picking up steam… Ron Paul’s book is rising on best seller lists and the news is littered with reports covering and debating aspects of the argument.

Although I fully support any effort to put down or at least restrain the Federal Reserve, I’ve been thinking that a smaller, more symbolic move might also be a step in the right direction.

I call it “Three Strikes and Bernanke is OUT!”

Strike 1. In Mid 2007 Bernanke either completely misses the significance of the housing decline or makes a serious blunder by assuming he and the Fed could bluff their way through the decline by asserting that the subprime implosion and the wider housing troubles were “contained” and economic growth would continue:

“Given the fundamental factors in place that should support the demand for housing, we believe the effect of the troubles in the subprime sector on the broader housing market will likely be limited,”

From the August 7th 2007 FOMC statement:

“Nevertheless, the economy seems likely to continue to expand at a moderate pace over coming quarters, supported by solid growth in employment and incomes and a robust global economy”

Strike 2. In the fall of 2008 Bernanke along with Treasury Secretary Paulson revert to complete reactionary panic mode making their famous “won’t be an economy on Monday” plea to congress while urging on the largest taxpayer funded swindle in history.

Strike 3?... September 15th 2009 Bernanke indicates that the recession is over:

“From a technical perspective, the recession is very likely over at this point,”

With this simple statement Bernanke has made the mother of all bottom calls… the bottom of the great unwind over which he presides and also bears some responsibility for creating and exacerbating.

Not only did he misjudge the role that the Fed’s “easy money” policy played in creating the crescendo of our massive credit bubble, Bernanke missed the impact of the resultant decline and deleveraging, he seriously overreacted once there was nowhere else to hide… and now he makes arguably earliest and most significant bottom calls in economic history.

I say “three strikes and you’re out”... If the bottom is not in… Bernanke is out.

If we are to have the Federal Reserve (… i.e. a massive central planner) at all, does America not deserve better than an unrealistic chairman who is a three time loser?
Posted by SoldAtTheTop at 9:40 AM