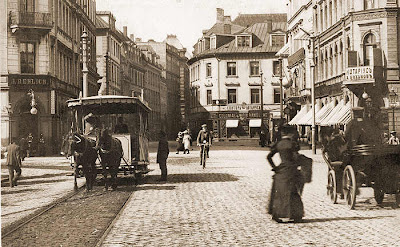 NOTE… Be sure to bookmark the Scary Housing Dashboard for a real-time view of the eleven housing markets now reaching for new price lows.

While many have become convinced that a bottom to the national home price decline was seen during 2010, there is growing evidence to the contrary, including eleven of twenty markets tracked by S&P/Case-Shiller reaching for new lows and multiple home price index sources showing generally that prices have all but retraced the distortive effects of the federal first-time homebuyer program.

Further, while nominally (i.e. not adjusted for inflation) home prices may have gone a long way into correction territory, in real terms (i.e. inflation adjusted), national home prices are still significantly elevated (possibly by as much as 15%-20%) above long-run norms.

Some years back, Yale Professor Robert Shiller produced a long-run nominal home price index for the U.S. by fusing together data that had been gathered from a number of historical archives.

Shiller then adjusted the index for inflation revealing the very interesting fact that, in real terms, prices for U.S. homes changed very little over the span from 1890 to the mid-1990s.

This might come as a surprise to many since recent “common sense” notions held that homes were always a great investment carrying the implication that they must typically increase in value yet, the reality is that over the long run home prices must stay in-line with changes in the level of income (the source generally used to fund the home cost) or else typical households would not be capable of making a purchase.

Now as we are well aware, real home prices began to swell in the late 1990s reaching a peak in 2006 after having increased by over 80% nationally and even much more in some of the more frothy markets representing a massive and abrupt deviation from the long-run norm.

Since 2006 home prices have continually declined yet the current level is still significantly elevated over the level that had been typical for the 100 years prior to the bubble.

Further, it’s important to note that the ten year rate of change of real national home prices is still positive... we have yet to experience enough of a decline to erase all the gains of the prior ten years.

This paint’s a pretty clear picture… the national home price decline has further to run, possibly as much as 15%-20%, before real prices reach the long-run trend and a level more in-line with fundamentals.

Posted by SoldAtTheTop at 12:25 PM