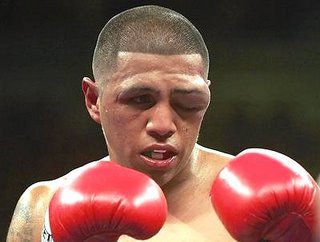 Not to get too carried away with a boxing analogy but if the “new home” market were a prize fighter, it would be, at best, bloodied, bruised and confused, staggering aimlessly around the ring seemingly looking for the most comfortable piece of canvas to use for nighty-night.

By now it’s been well reported that the July New Home Sales results were poor but digging a little deeper into the report one finds some truly harsh figures.

Next, look at the national numbers for “New Houses (still) For Sale”:

Now, look at the national numbers for “New Houses Sold” by price range:

So, I suppose this is what all the home builders were talking about. A very abrupt and striking collapse of the “new home” market seems well underway.

Considering that Toll, Pulte, Centex, KB Home and others are holding an unsold, and growing inventory of 568,000 new homes, I wonder how long it will be before they give up on offering buyer incentives and start getting down to the business of slashing prices.
Posted by SoldAtTheTop at 4:30 AM