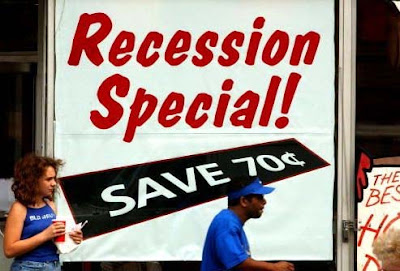 Last week I reported on a relatively new recession probability indicator (… the “markov switching” series recently introduced to the Fed FRED/Blytic) that was giving a pretty clear, though preliminary, indication of probable recession.

Since then, there has been quite a bit of scuttlebutt around the econo-blogesphere (here and here) about this series and the validity of its present value.

While I agree that this series’ nearly 20% indication of recession is VERY preliminary (as I noted in my original post), I would like to respectfully take issue with the analysis offered by some of the “debunkers” of this recession warning as well as add some further perspective on the series in general.

First, while Professors Chauvet and Piger suggested (in the original methodology paper) that a probability value at or above 80% for a period of three consecutive months was required for a positive indication of recession, I would like to point out that looking at the “minimum” and “maximum” extract of all reported values for this series indicates pretty clearly that the current 20% is not likely to be completely “revised away” as some would suggest.

Further, looking EXCLUSIVELY at the “maximum” reported values clearly shows that there is cause for concern in so much as NEVER has the “maximum” series indicated a value at or above 20% that a recession hasn’t followed within 6-8 months.

In order to determine the “minimum” and “maximum” series, I simply extracted the MIN and MAX values from every reported period (from Professor Piger’s complete history of this series) for this series thus creating two additional series, one containing all the lowest reported values for each period and one containing all the highest reported values (you can download my spreadsheet here).

Posted by SoldAtTheTop at 12:07 PM