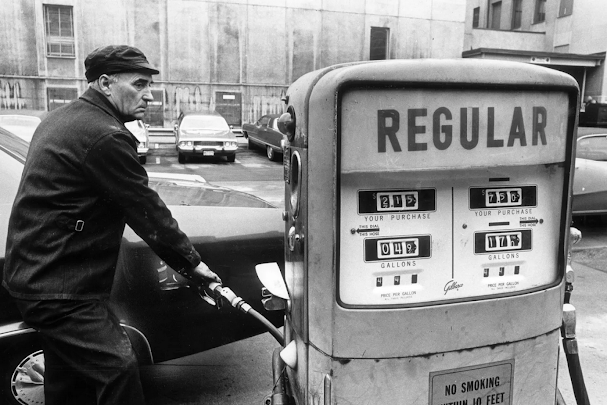 So, it appears that consumers are spending significantly more on energy (an obvious fact for anyone filling up at a gas station recently), which is impacting spending on both food and other nondurable goods, a classic stagflationary pricing dynamic.

Historically, increasing energy costs is nearly synonymous with general inflation (a fundamental driver) and very clearly influences the PCE-deflator index (price index baked off of personal consumption expenditures data as opposed to the traditional consumer price index CPI), one of the Feds preferred measures of inflation.

The following data visualization (click for dynamic version) shows The U.S. Energy Information Administration’s price index for all formulations of gasoline reflecting the weighted average price of gasoline as of this Monday (in blue) on the left axis and the year-over-year percent change (in red) of the Personal Consumption Expenditures deflator index on the right axis.

Notice that the general relationship indicates high correlation between the average price of gasoline and the annual rate of change in the PCE-deflator as well as the fact that (the more timely) gasoline prices appear to be indicating that there is more inflation to come.

Posted by SoldAtTheTop at 3:05 PM