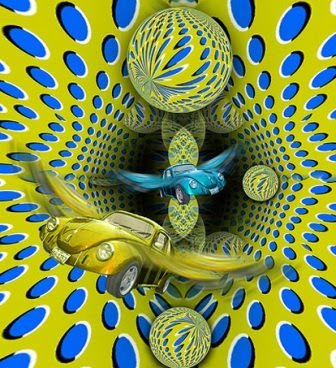 There is simply no such thing as an “L”-shaped recession (or recovery as some seem to call it).

It’s more than a misnomer… it’s a figment of our seriously delusional collective imagination.

Now, you can always find a period whereby you can pick points on a data series where the value has gone nowhere… for example, the average “real” (inflation adjusted) value of the S&P 500 during April of 1995 is roughly equivalent to its “real” value during February of 2009.. does that constitute an “L” whereby the stock averages value had gone nowhere for 14 years?... of course not… during that period stocks trended up and then, since 2000, down.

We know innately (whether we want to admit it or not) that what’s important is the trend and you would be hard pressed to find a period where a given important economic data point (unemployment, stock index, non-farm payrolls, consumer prices, etc.) simply went sideways.

Japan is most often cited as the prototypical example of an “L”-shaped economy yet upon closer inspection (look at the “real” NIKKIE 225 for instance) we will see that the trend has NOT been sideways but, in fact, down.

Again, as I have often cited, our own economy is nearing its own “lost” moniker as the latest economic decline sets new lows in arguably the two most notable barometers of macroeconomic health, Jobs and Stocks. 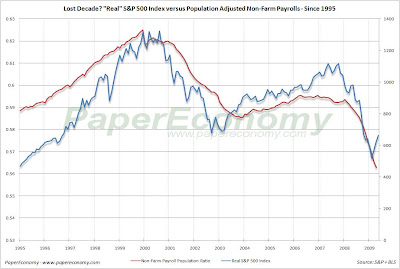 So it’s not surprising that we, collectively, have a hard time digesting the trend seen above as it speaks volumes for our general economic climate and, of course, all it speaks is bad.

But it’s also important to recognize when we are inventing a theme that in some way assuages the collective mood rather than deals in reality.

A “jobless recovery” is a better theme than “the weakest job recovery in history” or the more recent reality the “all the jobs gained since the 2002 ‘expansion’ have now been lost … and then some … while work age population has increased over 20 million over the same period” theme.

These realities are hard to accept but equally hard to avoid.

At the beginning of this year I began developing a theme of my own… The “PRIME BOMB!”… which you can read in better detail here and here… and, as of today’s headlines, appears to be gaining some significant traction on the playing field of reality.
Posted by SoldAtTheTop at 12:57 PM