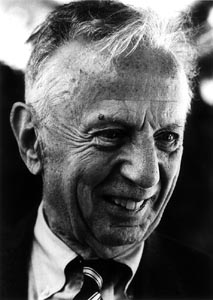 The famed economist, Charles P. Kindleberger, author of over 30 books, including the great title “Manias, Panics, and Crashes: A History of Financial Crises”, appears to have spent his final days clipping out newspaper articles in order to corroborate his intuition of a mounting real estate bubble.

This is no small bit of trivia as Kindleberger not only lived through the Great Deperssion, but was an active and astute economist publishing works throughout the 1930’s and onward.

The following is an excerpt from an interview with the Wall Street Journal published less than a year prior to Kindleberger death in July of 2003:

The object of his greatest fascination today is the real-estate market. For weeks, Mr. Kindleberger has been cutting out newspaper clippings that hint at a bubble in the housing market, most notably on the West Coast. Nationwide, median home prices are up about 7% from a year ago, even though the stock market has tanked and the economy has floundered. Over the long term, economists agree, housing prices can't continue to outpace growth in household incomes. Mr. Kindleberger says he isn't certain there is a housing bubble yet, "but I suspect it is."

The trick with spotting real-estate bubbles, he says, is that they don't always spread. In 1925, for instance, real-estate prices in soared and crashed, but that didn't spread to the rest of the country. Yet he notes that something is distinctly different about the nation's housing market today, when compared with 1925. Fannie Mae and Freddie Mac, two large government-sponsored enterprises, own or guarantee nearly $3 trillion in mortgages, helping to keep the mortgage market liquid with cash. That is a boon to homeowners, but Mr. Kindleberger says he fears that Fannie Mae and Freddie Mac's deep nationwide presence in the market is fueling a speculative fire.

A Fannie Mae spokeswoman describes the argument as "preposterous," and notes Mr. Greenspan dismissed the chances of a housing bubble in testimony to Congress last week. Robert Van Order, chief international economist for Freddie Mac, says home prices might decelerate in the months ahead, but they're unlikely to crash because interest rates are so low, the inventory of unsold homes is also low and the economy has proven surprisingly resilient.

Yet Mr. Kindleberger isn't convinced. "If I was 30 years younger," he says, "I'd write a small book on Fannie Mae and Freddie Mac."

Given today’s real estate climate, the response by the Fannie Mae spokeswoman and the Chief Economist for Freddie Mac seem so ridiculously flimsy and comical.

It seems almost too perfect for Fannie Mae to offhandedly dismiss Kindleberger’s concern as “preposterous” by simply invoking the “Maestro said so” response.
Posted by SoldAtTheTop at 5:11 AM