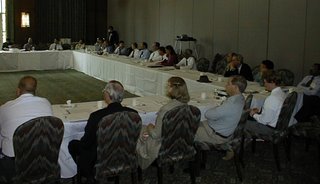 Yesterday, Goldman Sachs held its first annual “Housing Conference” which brought together a host of economists, CEO’s and others in an effort to gain some visibility over the fate of the housing market in 2007 and beyond.

In addition to an excellent opening macroeconomic overview by Jan Hatzius, Chief US Economist of Goldman Sachs, the conference included lengthy presentations on sub-prime and non-traditional mortgages, credit quality, and homebuilding.

The following chart (click for larger version) taken from Hatzius’ opening overview shows the effect of the housing decline on GDP. Note how declines to housing related employment, mortgage equity withdrawal, housing wealth, and residential investment all weighed on GDP shaving off over 1.5% in Q3 and Q4 of 2006 and are projected to subtract 1% for the remainder of 2007.

Kicking off the panel, moderator Chris Hussey asked the audience members to vote on a series of three questions with the results being made immediately available after the voting.

The following questions-results were given:

Richard Dugas and Ara Hovnanian started out the discussion by reiterating a similar point made earlier in the month by Robert Toll by making note of some “encouraging” signs of cancellations abating and increased activity.

Ian McCarthy quickly followed up with an interesting quip about allowing the audience members to vote to kick any particular home builder off the panel then indicating that he’s yet to see any encouraging signs with still overwhelmingly high inventory.

Quickly, Hovnanian interjected that he did not want his prior statement to indicate too much optimism and that he would be hopeful for even a very slow recovery.

When asked about Robert Toll’s interesting “A” rating of the California market in his most recent conference call, Joel Rassman replied “If you looked at the last four weeks, California has shown a remarkable turn around and I think that’s what Bob was indicating”

To that Ian McCarthy suggested that although he did not want to criticize Bob Toll, extrapolating the results of a four weeks for a given market would be misleading and that more data is required to make any real claim of a market turn around.

When asked about what product trends that had been seen during 2006 Hovnanian replied “I can’t claim to see a trend by market segment..” adding “its really supply and demand at the local level”.

Rassman added “I think it’s different in every market… I’m not sure I could say that there is a product type that’s immune from the slowdown.”

When asked about what cold be done to reduce cancellation rates Rassman suggested that deposits were a key method but that given the circumstances in the housing market “we’ve seen people walk from $60K – $70K in deposits.”

Hovnanian suggested cancellations for buyers that were less than 30 days into the buying process hasn’t changed measurably but buyers that were in backlog for 6 to 9 months during 2006 dropped out in greater numbers as they witnessed price drops that made their loss of deposit more acceptable.

When asked whether the discounting has reached the point at which consumers will be enticed to buy McCarthy quipped “Pass the crystal ball and let me rub it… We are still selling homes. It’s very early in the selling season to say that we have reached the bottom in discounting… I’m not sure we are there today.”

Rassman added “As soon as they believe prices are no longer falling, consumers will come back.”

The whole conference was originally webcast live but can be listened to in its entirety at the following link.

Posted by SoldAtTheTop at 1:13 AM