The January results again confirm that Arlington is by no means a “stand out” amongst its neighboring towns as Baron suggested in his email and, in fact, is following along on a path wholly consistent with the trend seen in the county, state, region and nation.

I think dwindling real estate ad revenues might be a probable answer.

One point to keep in mind when interpreting the January Boston area single family home sales results is that sales were EXTREMELY weak.

In fact, the home sale counts for the towns noted in this post (and likely all other Boston metro area towns) are at or BELOW the lowest levels seen since the recessionary environments of the early 2000s and the early 1990s.

We are now seeing sale counts registering well below seasonal trends with many towns dipping down to single digit homes sales for January and for February (I have already captured all the single family sales data for February) is even worse.

Funny anecdote though... Last week I had a well known Arlington Realtor tell me that in January there was over 35 single family home sales... That would be roughly equivalent to 73% of the current single family inventory being sold in one single month... Realtors can be VERY creative with the truth.

As I had shown in my prior post, the data when charted and compared to other towns in the region proves there are absolutely no grounds to call Arlington’s market exceptional.

The following chart (click for much larger version) shows a history of Arlington’s January median sales price since 1988 along with the annual median price outcome. Notice first that although the latest result spiked up to a high of $534,350, the January reading is generally a very poor indicator of the median for the entire year.

This highlights a deficiency in using the median value when determining price movement in that if there are very few sales, as there was in January, the median price can jump up or down radically. 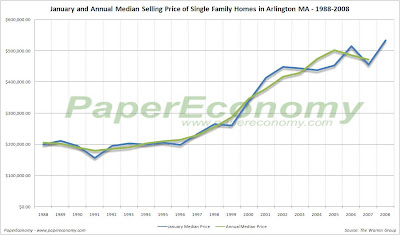 The next chart (click for much larger version) shows that home sales in Arlington have been essentially flat during the last 15 years, a result that is generally to be expected when looking only at the sales of one town in isolation. That being said though, Arlington only saw 12 single family home sales in January, the lowest result on record since January 2000. 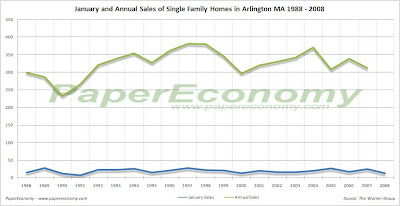 The final chart shows how the year-to-date median sales price for Arlington, Bedford, Belmont, Cambridge and Lexington has changed since 1988. Notice again that the one month median price data is very volatile jumping radically up or down for each of town. It’s important to note that all towns are now seeing monthly home sales counts at or lower than the recessionary environments of the early 2000s and the early 1990s. 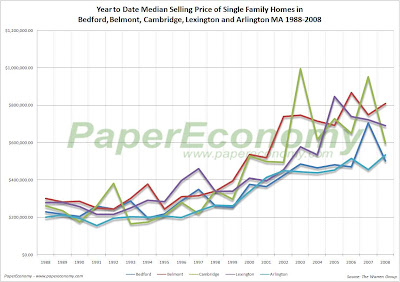 Please let editor Baron know what you think of this misstep.
Posted by SoldAtTheTop at 8:42 AM