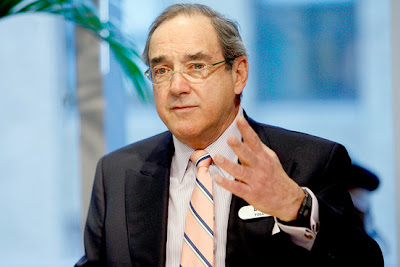 Mr. Toll is a complex man to say the least… Today’s Toll Brothers portion of the UBS Building and Building Products CEO Conference was easily one of the more interesting (though slightly odd towards the end) that I have listened to in recent years.

The following is an interesting excerpt concerning FHA as well as an odd ball… almost bizarre account of American culture from an obviously conflicted vantage point of one of the country’s largest luxury home builders.

Questioner: On the FHA stat, a lot has been made about the whole industry going there right now, not that it’s a big number for you guys but I’m surprised that even 8% of your volume would be … If that is supposed to be “low income” qualifiers how does that jive?

Joel Rassman: and we also have two condo-convert buildings that qualify for FHA in general … between multi’s that are built units and the condo convert it runs about 8%...

Joel: Well it’s a combination of income and price point for your house but I don’t know the FHA statistics.

Bob: Income… I’m not aware that there is any barred income to taking advantage of FHA if you’re a multi-millionaire… I thought you could still do it… I didn’t think you had to be poor…

Questioner: What’s the governor on the usage then though? Or why wouldn’t obviously everybody take advantage of it… that was the intent originally… Right?

Bob: The governor on it was that it was impossible to deal with, you had all sorts of inspectors and qualifiers and administrators… that made it a big pain in the butt… and so Fannie Freddie was around with the same limits and much easier financing so why would you go FHA?

Well the reason you go FHA is… um... FHA is the new Sub-Prime.

What the government is doing is beyond belief in that “once upon a time” ... I’m talking about these glorious days of like… a year and a half ago… FHA did very small percentage of the business of the country. I don’t know what the actual percentage was… I bet it was 2% or 3%... and today FHA is doing like 30% of the business and the reason is yesterday’s sub-prime is today’s FHA.

Whereas on a Fannie Freddie you’re talking 20% down … you can go get the last 10% if you struggle hard from another guy and give a combo-rate but on FHA you’re talking 3.5% down… now if you’re doing business at $120,000 and your giving and $8000 credit and your only making the guy put down 3.5% not only does he get the house but he gets some cash to walk away from the settlement table with… so yesterday’s sub-prime is today’s FHA…. I think its nuts.

Bob: It’s a definite train wreck… the flag will go up within the next couple of months… it already has preliminarily gone up… “Bail us out”… “give us some more money”…

Questioner: I mean… not you guys but again … some of the other publics have 60% or 70% of their volume now coming that way…

Bob: Thank god the country is rich enough to afford it if we don’t keep going on and on and on…

You see how much money they say expect will be coming in because the guys that came back from Switzerland clean? (… SAT: a reference to the IRS’s recent voluntary amnesty program) … how much did they say… ten…

Joel: I’m not sure this is the appropriate conversation in this room… Bob…

Bob: Any other questions?

Questioner: … as you move forward, I understand that things haven’t really changed and you’re not really seeing a change maybe in the size of the house or the demands of the house or what buyers want… we talk to a lot of private builders and we consistently hear that they believe that the future for the business is going to be dramatically different in terms of the kind of houses buyers want… they want stuff that is more urban… they want stuff that is closer to transportation… they are willing to sacrifice size for that and I’m just wondering how you think about that within the context of your buyers…

It’s always the same thing… we want smaller, more affordable, more energy efficient … we want to be closer to the city… we want more urban … we want more flex space… it’s all bull.

As soon as it straightens itself out and the market gets healthy again… if the market doesn’t get healthy… if the society reflects an economy that is running at half the speed the economy ran at during the good times of the cycle, the you’ll see a paradigm change in our business.

But unless that occurs, I don’t think you will. The same drives and ambitions that drove the market will once again drive it.

I don’t know how deeply we want to get into this… It would require also a political socio-economic group thesis feeling (SAT: WOW!.. What?!) to occur in order to change the business.

Up until Regan… which means coming from the second world war through Jimmy Carter… it was embarrassing to a certain extent to show your wealth by building a 20,000 square foot manse… by having three in help… most of the country was pretty demure… and kept it under its seat…

And then came along the Regan Revolution… and “trickle down” economics… and it was not only alright … it was deserved and right and applauded to have wealthy people buy boats… buy big homes… have multiple homes… for they were the drivers of industry and the Capitalist system in this country… and the middle class would derive benefit from that.

Let forget about whether that is true or not… doesn’t matter… what happened was a different mindset took the public entirely and it was alright to get bigger and better and show the wealth… that is still with us.

Now, Obama has spoken about changing the makeup of society … but every time he has he’s gotten slapped around for it.

By the way… just so you know where I stand… I’m a liberal Democrat and raised tons of money for Obama so I don’t want you to think that this comes off of my personal feeling... I was the only builder that voted against the NOL extension (SAT: tax carryback from recent legislation) but that’s politics and I don’t want to get into that…

But what I want to get into is where the society now stands… It’s going to take a mighty tough guy to convince this society that it ought to go back to pre-Regan philosophy… which is that it is wrong to show your wealth… so unless you believe that were going to have a socio-economic tidal wave change the way we live, I don’t think you’re going to see a difference… I think people are still going to want three bedrooms instead of two bedrooms. I think they are still going to want 5000 feet instead of 4 or 4 instead of 3 or 3 certainly instead of 2… and that goes for high-rise as well as suburban luxury.

Sorry for all of that…
Posted by SoldAtTheTop at 10:55 PM