Today, the National Association of Realtors (NAR) released their Pending Home Sales Report for December showing a tepid 1% increase since November as buying activity continued to slow in the wake of the housing tax gimmick inspired mad-rush seen in October but still remained at a level 10.9% higher than seen in December of 2008, a notable increase.

Meanwhile, the NARs chief economist Lawrence Yun warns that the $8000 tax carrot may be clouding the waters:

"There are easily understood swings in contract activity as buyers respond to a tax credit that was expiring and was then extended and expanded, ... These swings are masking the underlying trend, which is a broad improvement over year-ago levels.”

Where Yun is wrong, of course, is that the tax gimmick has not masked an underlying trend of "broad improvement"... its simply temporarily papered over a major declining trend in existing home sales that still has a long way to fall before it reaching a more fundemental level inline with both new home sales and "organic" existing home sales. 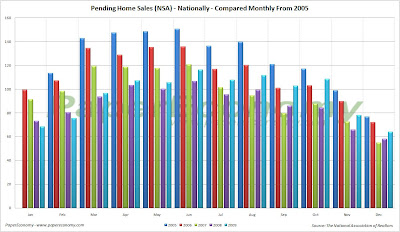 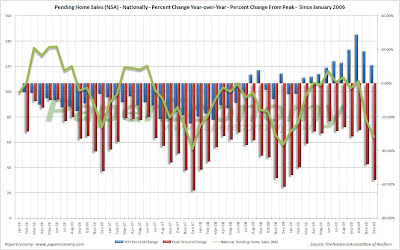 Posted by SoldAtTheTop at 9:04 PM