Bailin’ out the Bubble? 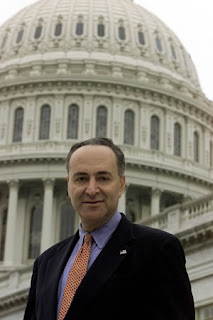 On Wednesday, the Senate Joint Economic Committee (JEC), chaired by New York Democrat Senator Charles Schumer, released a report entitled “Sheltering Neighborhoods from the Subprime Foreclosure Storm” that both presents a dire outlook for millions of homeowners nationwide as well as attempts to set the stage for possible federal legislative action.

Although the report presents a fairly accurate account of the issues surrounding both the subprime situation as well as various aspects of predatory lending, it clearly falls short of fully recognizing the true depth and breadth of the coming wave of foreclosures and wrongly places the burden of helping to mitigate that torrent on the shoulders of taxpayers.

Essentially taking a “where all in it together” position by linking the interests of the lender, homeowner, neighbors and local government which it calls the “stakeholders”, the report attempts to define both the actual dollar cost of a foreclosure as well as the cost of preventing one.

This isn’t an altogether a bad concept in that it is certainly true that the “stakeholders” mentioned are all effected, and in fact, recent studies by the Federal Reserve bank of Chicago suggest that there is even a strong correlation between foreclosures and increased rates of violent crime.

But what this really highlights is that foreclosures are local events, effecting local economies, and as such are probably best handled, at least initially, by the state and local governments in which they occur.

To be fair, the report never explicitly suggests that there should be a wholesale bailout of bad loans and furthermore only proposes federal assistance to existing local community-based non-profit organization that have proven track records in foreclosure prevention.

The foreclosure mitigation suggested by the report is limited to assisting with the costs associated to refinancing to fixed rate loans as well as funding counseling and possible legal services for borrowers that experienced more egregious predatory circumstances.

Never the less, by going over the head of state and local governments, there is a clear risk of circumventing the responsibility and value that government entities at the state and local level can have as well as immediately burdening the federal taxpayer with the cost.

For example, in early 2006, amidst growing numbers of foreclosures and even larger numbers of delinquencies clearly originating from questionable lending practices, a series of state Attorneys General successfully strong-armed Ameriquest Mortgage into providing $295 million in compensation, $30 million in state restitution and a commitment to strengthen lending standards in exchange for dropping inquiries into its questionable business practices.

Using the dollar estimate for foreclosure mitigation as outlined in the JEC report, these awards alone could have provided the proposed assistance for 98,484 individual homeowners.

Keep in mind, these were awards from only one lender.

If state governments, who are in many ways particularly well suited to bring legal action to corporate entities operating within their borders, were to target ALL the players involved in the food chain of loose lending, from mortgage brokers and lenders to the Wall Street financial institutions who effectively encouraged the majority of questionable lending practices, it would leave the financial burden squarely on the shoulders of those who caused it.

This could easily be achieved by examining the data collected by local and national mortgage banking associations as it relates to foreclosure events to see the clear patterns of questionable, predatory and fraudulent activities on the part of mortgage brokers and lenders.

The report also fails to recognize the true scale of the coming wave of foreclosures limiting its analysis to the subprime market which is likely to be only the tip of a vastly larger iceberg providing yet another reason why it would be unfair to burden the taxpayer alone with the cost of the repairs.

On a more dangerous note, the report supports the revamping of FHA, apparently as has been specified by the yet to be fully passed FHA Modernization Act, as well as funding and tasking FHA with the responsibility of overseeing a “rescue fund” allocated for purchase of failed mortgage loan portfolios.

This may be the worst recommendation of all as it effectively makes the federal government, i.e. you, the next great subprime lender by dramatically lower the qualifying standards for FHA loans as well as wrongly tasking HUD with the role of lender of last resort for failed lending institutions.

Keep in mind that the Federal Reserve has, as one of its principle mandates, the role of lender of last resort and is, in fact, prepared for possible systemic failures.

The report then concludes with a series of fairly sound proposals including actions to strengthening lending standards, create a federal anti-predatory lending law, establish a standard for determining a borrower’s ability to pay, and plain language disclosures on mortgage products.

If you agree the sentiment in this post, let Senator Schumer know by either emailing his office with your take on the subject or simply email a link to this post.

Posted by SoldAtTheTop at 11:21 AM