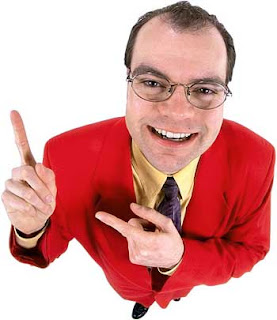 Now that the National Association of Realtors Chief Economist David Lereah is soon to be history, let’s draw a bead on some of the other less-than-accurate, bullish-cheerleading paid-quacks out there spinning fantastic stories of housing’s future strength and riches.

The CEO of the mortgage information service, The Mortgage Market Guide, Habib is frequently featured on CNBC as a mortgage expert who is well suited to advise homebuyers.

Of all the “experts” featured on CNBC’s bullish airwaves, Habib would handily win any competition for the most outlandish and self-serving statements, forecasts and recommendations.

In past CNCB segments, Barry has:

This center, directed by Nicholas Retsinas, last year published a widely reported paper entitled “The State of The Nations Housing: 2006” that very clearly concluded that that outlook for residential housing was positive.

“Over the longer term, the outlook for housing markets is favorable. With household growth accelerating and second-home demand climbing, the number of conventional homes completed and manufactured homes placed in the coming decade should easily exceed the 18.1 million units added from 1995 to 2004. In addition, improvements in the mortgage finance system over the past several years, together with stricter inventory management in the home building industry, will help to dampen boom-bust cycles in the future. As a result, housing production should average more than two million units annually over the next ten years.”

Unfortunately for the average media consumer, it was not widely reported that the Joint Center for Housing Studies and the report itself was funded by such notable real estate insiders as The National Association of Realtors, The Nation Association of Home Builders, Fannie Mae, and Freddie Mac.

As for Retsinas, he has appeared frequently on sources such as PBS’s Newshour and CNBC and generally presents a somewhat balanced, possibly a tad too optimistic outlook while seemingly conscience of maintaining his credibility.

The “Bubble? What Housing Bubble?” Smiths

This married couple, Gary and Margaret Hwang Smith, two professors of economics at Pomona College in Claremont California last year published a widely reported paper (featured prominently by the New York Times in a article entitled “Some New Math on Homes”) that suggested that not only were many areas formally purported to be exhibiting signs of bubbles NOT bubbles, they were “screaming bargains”.

The Smiths, who have recently purchased a nearly million dollar home near their collage in Claremont also provide professional services for those who need financial coaching in order to “bring forth their best life”.

Their paper initially takes fairly sound position of using present and future rental income to calculate a “net present value” of a given home.

But then, unfortunately, the paper goes to great lengths in an attempt to justify recent prices by making overly optimistic assumptions as well as including some truly fuzzy logic.

For example, the Simth’s assist the cash flow derived from rental income with additional value derived from “non-financial factors”, such as a desire for privacy.

That’s about where the papers leaves reality and enters the realm of shameless spin and wishful thinking.

Remember, the problem with all of these “experts” is not that the average homebuyer turns to them to determine whether or not to make a home purchase.

In all likeliness, the average homebuyer has never even heard of any of these characters, even the NAR’s Lereah.

The issue here is that the lazy traditional media and overly optimistic and bullish business media take the reports, releases, and statements of these people and their respective groups and recast them into simple news blurbs that, being only loosely bound to reality, sow the seeds of widespread misinformation.

That being said, for a year now things have looked so bad that, try as they might, real estate industry shills have found it increasingly difficult to present overly optimistic information while simultaneously maintaining credibility.

Nevertheless, it’s important to remember, even celebrate, their contributions to inflating the single greatest housing bubble the country has ever seen, for at the very lest, we should remember next cycle to take every forecast with a grain of salt.

Posted by SoldAtTheTop at 12:20 PM