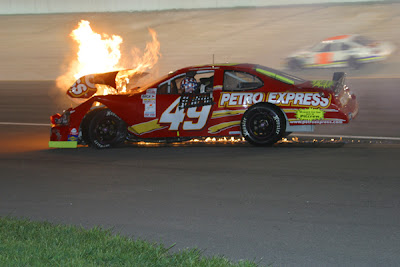 Today, the National Association of Realtors (NAR) released their Pending Home Sales Report for March 2007 showing spectacular weakness on a month-to-month and year-over-year basis, both nationally and in every region.

Additionally, the both the Northeast and Midwest regions have fallen back below 100 indicating that March’s home sales activity was BELOW the average activity recorded in 2001, the first year Pending Home Sales were tracked.

Like my sever, the nations housing markets continue to crash and burn and now with the completion of the March results we can see unequivocally that the recent weakness, although clearly influenced by weather patterns, is fundamental and systemic.

According to David Lereah, the soon to be Ex-Chief Economist of NAR (hat-tip BubbleMeter - David Lereah Watch), the “el-nino” effect/ruse is now a thing of the past leaving the subprime slime as the main culprit in the slowing sales.

“Although the weather improved in March, we’re starting to see the effects of a decline in subprime lending and tighter lending standards… Home sales will be relatively sluggish in the second quarter, but a modest uptrend should resume during the second half of this year.”

Keep in mind the current pending sales decline comes on top of last years historic fall-off so the continued weakness is a sure sign that the decline is not ephemeral.

Look at the March pending home sales results and draw your own conclusion:

So it appears that, year-over-year, contract activity is still dropping rather sharply with ALL regions continuing to show significant declines.

Posted by SoldAtTheTop at 10:27 AM