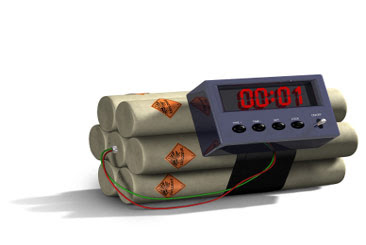 I’ve been arguing for the better part of two years that although the traditional media and apparently general consensus has focused on subprime and other “toxic” mortgage products as the source for the credit tumult, the historic deterioration would by no means be limited to these “bleeding edge” products.

Although there is significant debate about the true drivers of mortgage default, most individuals in default cite unemployment as the cause while other key instigators are: risky or insufficient household financial planning (high consumer debt and low/no savings), low-equity stake and housing depreciation, and simply general recession.

The key point to consider though is that while all of these factors have contributed to creating environments of high mortgage default in the past, our current circumstances make these past periods look like walks in the park.

In an effort to prove out this conjecture, I will track, with a quarterly recurring post, the operating performance of one of today’s most celebrated “conservative” mortgage portfolio lenders, Hudson City Bancorp (NYSE:HCBK), to see how their borrowers perform over the course of this economic downturn.

It’s important to understand that although Hudson City’s average borrower has a reasonable LTV of 61.5%, they are still seeing a precipitous increase in loan defaults.

In fact, currently the average LTV of their non-performing loans (defaulted loans) is 69% so “prime” borrowers with 31% equity at the time of origination are now defaulting in steadily increasing numbers.

Notice that defaults have been on the rise since Q2 2006 while in Q2 2007 things really started to heat up. 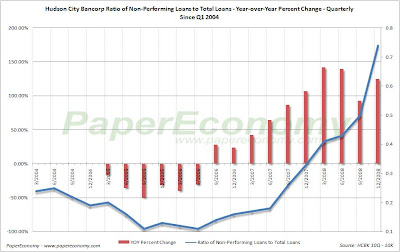 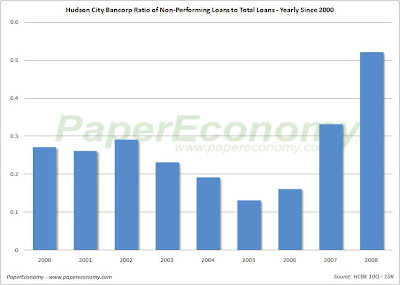 But how does the growth in defaults of the Hudson City Bancorp “prime” portfolio stack up compared to other well know default rates?

The Following charts compare the Hudson City default rate to that of Fannie Mae and the MBAA foreclosure rate.

The top chart compares the normalized default rates since Q1 2004 while the lower two compare the same data since Q1 2007 in order to get a sense of the respective growth over these periods.

It’s important to keep in mind that although Hudson City is not experiencing the same ratio of defaults (Fannie Mae and the general MBAA rates are worse) the growth of prime defaults is comparable and, since Q1 2007, has even been substantially higher. 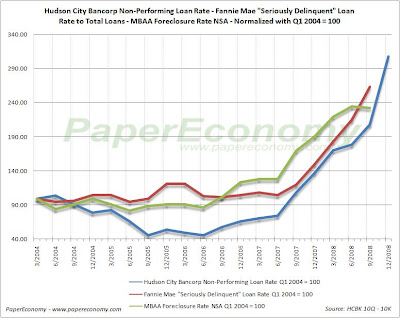 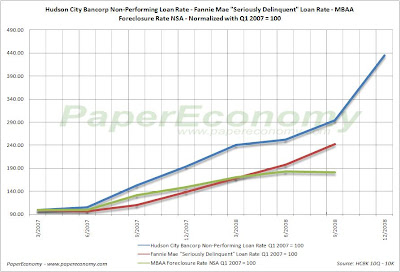 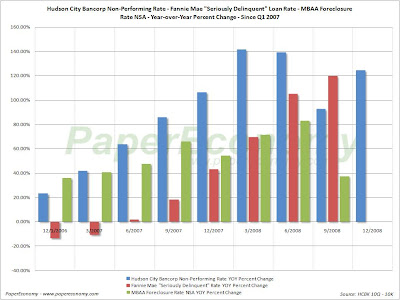 As for Hudson City loan loss provisions, as you can see from the following chart, the capital cushion is dwindling. 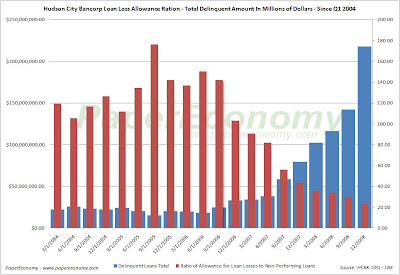 The key instigators in this growth of default is likely home price depreciation and unemployment both working together to bear down on “prime” homeowners as is shown by the following charts plotting the year-over-year percent change to the New York area S&P/Case-Shiller home price index against the Hudson City default ratio as well as the unemployment in New York and New Jersey since 2004. 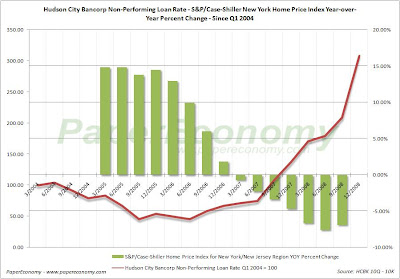 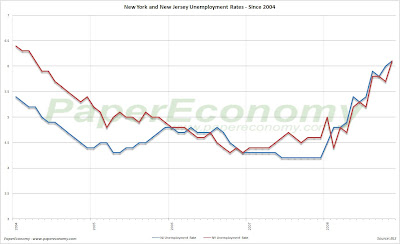 I will continue to update this data in coming quarters in order to see how slumping home values and rising unemployment affect the performance of “prime” borrowers.
Posted by SoldAtTheTop at 12:30 PM