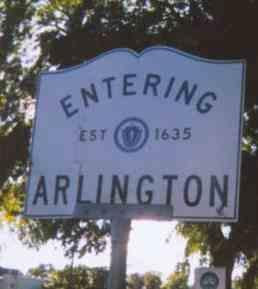 Subtitle: Living it Up at The Hard Times Cafe!

I choose Arlington as a result of the Boston Globe’s (relatively) recently published and absurdly anecdotal and ludicrous farce about the town’s “hot” housing market.

Baron attempted to justify the articles contents and in so doing, he disclosed his disgracefully poor abilities with even the most basic economic data.

I suppose this shouldn’t come as a surprise given that Baron also appears to be presiding over the final days of his sorry paper.

Ahh… Springtime in the Boston suburbs… Still a bit cold and rainy of course but you can almost feel the local Realtor anticipation welling up for the reemergence of the rush of “greater fools”… but I’m sure this year there is also some trepidation… and for good reason.

All current indications are suggesting that this is going to be a particularly… possibly historically… bad year for sellers and brokers of residential real estate.

The local job market is horrible and eroding fast with unemployment at 6.6% (and climbing) for Middlesex county and 7.8% for the state overall… The “values” of both single family homes and condos are plunging… the stock market remains weak and likely heading back to the lows while simultaneously halving most area residents’ retirement accounts… The state and local governments are running up against serious fiscal shortfalls… crime is up…

And Arlington… Oh sweet Arlington… for a brief moment in time an enclave for young and trendy upwardly mobile dual income professionals looking to “one up” each other with borrowed loot (but much deserved of course… they don’t give just anyone all that dough!) … now you too face the troubled times we live.

Yes, the town where “round robin bidding wars” were once all the rage is now looking more like it’s going “retro” … reverting back to its 70s and 80s rough-and-tumbly self…. Smack and Pocket Change!

Did you hear the news!? Bagles By Us has opened the “Hard Times Café” featuring the “Recession Buster Breakfast”, a $3.99 breakfast served all day every week day. 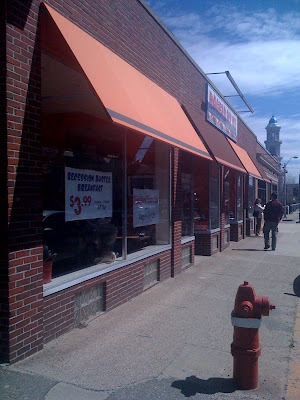 Now I’ll be darned… How Medfordy… and right at the foothills of Jason Heights too!

The March results give clear indication that 2009 could be historically slow with the monthly sales count falling to the lowest level of any March on record and the year-to-date sales count hovering just above the 1991 record.

The following chart (click for much larger version) shows a history of Arlington’s January median sales price since 1988 along with the annual outcome. 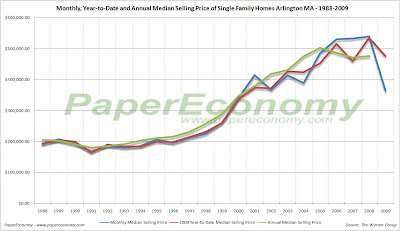 The next chart (click for much larger version) shows that annual home sales in Arlington have fluctuated in a range between 233 and 381 over the last 21 years with the peak selling year being 1998. 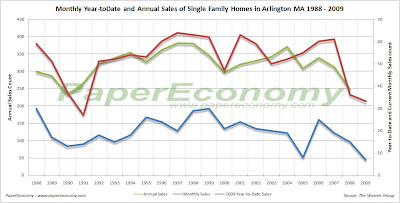 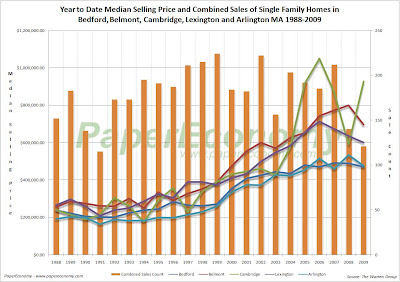 Posted by SoldAtTheTop at 10:06 AM