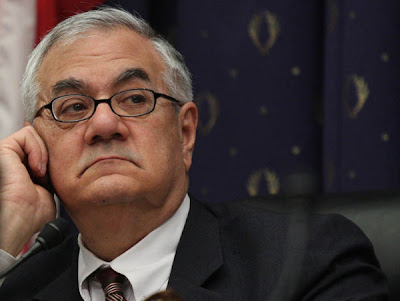 Ahh… the smell of fear… election season is upon us and while I don’t typically weigh in on issues of pure politics, I’d like to take a moment and remind any voters who should happen to reside in Massachusetts’s 4th congressional district how much of an embarrassing fraud your current congressional representative is.

Barney Frank as chairman of the House Financial Services Committee and throughout his thirty year long career has always been a firm advocate and champion of the role Fannie Mae and Freddie Mac play in our housing markets.

Even in early 2008 when the epic housing crescendo was obvious to most observers, Barney Frank was pushing ever harder for lower lending standards and higher loan limits for these two colossal and massively fraudulent government sponsored enterprises.

In March of that year I took to writing a letter to Rep. Frank protesting his move to relax lending standards and increase loan limits arguing that if congress enacted such changes it would likely aggravate an already troubled situation for housing.

Further, I closed my comment to him with the following statement:

“Although Congressional and Executive mandate apparently provide a dynamic and flexible environment for generating regulatory statute that suits the perceived whim of constituents (particularly in an election year), the “law of unintended consequences” remains largely rigid as it appears now quite clear that the main focus of Congress and the Administration later this year will be the federal bailout of Fannie Mae and Freddie Mac.”

To this Rep. Barney Frank responded as follows:

“Our biggest difference of opinion is your assumption that raising the limit will expose Fannie Mae and Freddie Mac to greater danger. I think the opposite is the case. I think that their ability to participate at the higher levels will add to their financial security.

I am glad to have your prediction that we will soon be engaged in a "federal bailout of Fannie Mae and Freddie Mac," because I disagree and this will give us some measure of the accuracy of our respective predictions in this regard.”

Not only did Rep. Frank NOT see the danger of the proposals he was pushing, he actually saw the changes as bringing the exact opposite... greater security.

Further, as is typical with Rep. Frank, he couldn’t simply disagree, he had to issue a challenge stating that he was glad I had made the prediction of the collapse of Fannie and Freddie because it would “give us a measure of our respective predictions in this regard”.

As you now know, my prediction was wholly more accurate that Rep. Barney Frank’s as in the summer of 2008 both Fannie and Freddie did, in fact, collapse being put under conservatorship by the federal government at the (yet to be fully determined) total cost of multiple hundreds of billions of dollars of current and future taxpayer money.

Of course, I sent a follow-up letter to Rep. Frank and after two years have yet to hear back.

You see, Barney Frank is a fraud.

He simply found a fortunate position in life in whereby the office he holds projects a measure of esteem, confidence and high honor that by mere association he too appears to reflect, yet like a chameleon it is only a ruse.

At best Frank is simply a pristine example of the warped sociopaths that inhabit Washington DC… rude, surly and vulgar, full of a sense of superiority, hungry for power, callous to the law of unintended consequences and ignorant on virtually all matters of any importance.

One can only hope that somehow the voters of the 4th district can find it in themselves to pull the lever for another candidate or, at the very least, not pull a lever at all.

Posted by SoldAtTheTop at 1:18 PM