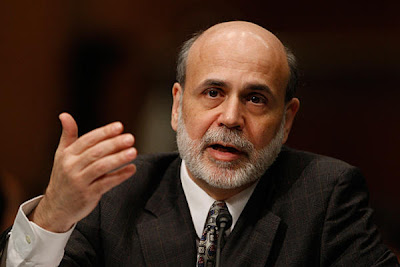 Listening to Bernanke over the last two days it should be clear that the Fed is going to go for another round of quantitative easing.

While the evidence for the next round of QE was only slight when I first noted Federal Reserve Bank of Atlanta Dennis P. Lockhart’s “posture of flexibility” position back in March, the potential became a near certainty by May with the oil spike, reemergence of the European debt crisis, the debt ceiling uncertainty and most importantly the double dip for the U.S. housing market.

As these and other issues work to shake confidence, it’s easy to see that the Fed will simply continue to work to bolster confidence using the only remaining tool it has, namely it’s “balance sheet”.

One way or another the Fed will implement an accommodative policy until it feels the “real” economy is function normally and can withstand shocks on its own.

The problem is though, there is nothing normal about an economy with a central bank lording over it just waiting for signs of failure and prepared to pump in liquidity at a moment’s notice…. The Fed is not instilling confidence, it’s creating dependency.

Japan’s “Lost Score” should provide ample evidence that a phony centrally manipulated economy is not the right solution to our economic problems.

What would be best for the economy now (and all along since 2008) is for the Fed to let the economy go and for all participants to face reality head on regardless of the recognized losses.

If hard times and recession comes as a result, so be it.
Posted by SoldAtTheTop at 1:34 PM