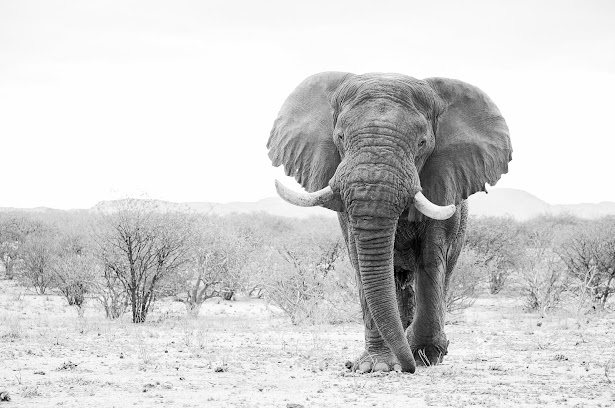 Something stinks in jumbo mortgage-ville.

For all of my adult life, the interest rate for jumbo loans has been at least a quarter percent (or more) above the rate for conforming loans, but recently, this relationship has flipped.

Recall that the primary goal of the massive “Government Sponsored Enterprises” (GSEs) Fannie Mae, Freddie Mac and Ginnie Mae, is to provide more affordable housing financing to the American population.

The GSE mortgage backed securities (MBS) come with an implicit guarantee (that was shown to be actually “explicit” when Fannie and Freddie were taken into conservatorship during the worst years of the Great Recession) of the “full faith and credit” of the United States government, thereby allowing this market in mortgage securities to exhibit the preferential pricing of near-riskless investment grade securities to the benefit of borrowers seeking lower rates of interest.

By contrast, the private, “non-conforming” lending market (i.e. loans that do not conform to GSE limits/standards …the market in “Jumbo” loans) would logically demand higher rates of interest given that private lenders financing this market are shouldering the full credit risk and not gaining the benefit of an implicit or explicit government guarantee.

This generally meant that the private lenders would perform more due-diligence when originating loans, demanding more down-payment (i.e. more skin in the game), and were more critical of home appraisals, and, further, made the loans at higher interest rates as compared to GSE lending.

Since early 2022 though, this relationship appears to have flipped with jumbo loan rates falling below conforming rates in the range of 25bps – 100bps! In my market, a local bank lender is advertising jumbo loans at a full percentage less than conforming loan rates. 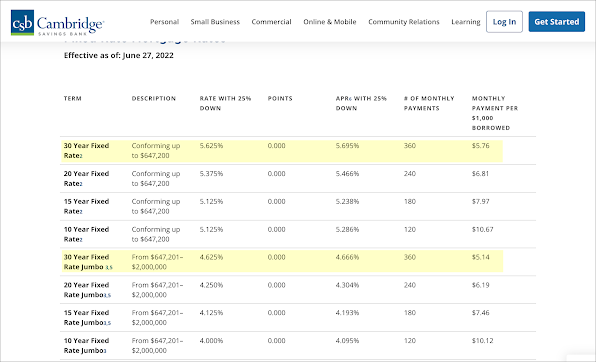 The following is the Fed FRED visualization (click for larger dynamic version) showing the relationship of the 30-year fixed rate conforming versus Jumbo loan rates since 2017.

Clearly there is a different risk-return calculus being performed in the current private lending market that appears to have significantly influenced the pricing of potential risk coming from the performance of these loans.

One explanation could be that the underwriting is very strict allowing private lenders to provide highly preferential interest rates but I have my doubts given some of the dynamics that I have observed in my local market (Boston… a real bellwether housing market) during this cycle.

First, while there is no comparison between now and 2006 (the height of insanity that was the Great Housing Bubble) in terms of “creative lending”, there appears to be another gremlin afoot.

In 2006, there were a plethora of creative loan products allowing borrowers to stretch to reach ever higher home prices (i.e. affordability loans); the negative/reverse amortization loans, interest only options, low documentation or no documentation (liar loans) together were all complicit in pushing home prices to their maximum in an effort to keep the party going for borrowers/buyers and the loan volume for originators/lenders.

Today, you don’t see these types of loan products advertised widely though I’m sure there are some examples that can be cited. What you do see though, are completed sales like the following (I have calculated the over-list sale amount for convenience as well as obscured the exact addresses): 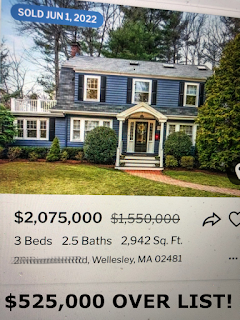 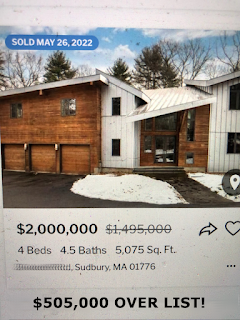 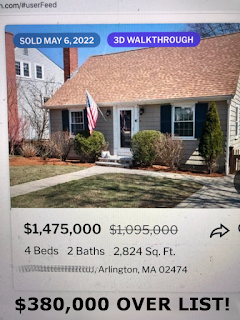 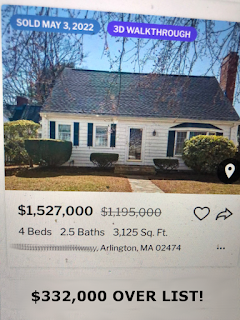 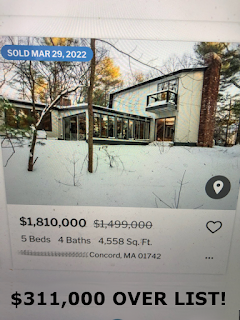 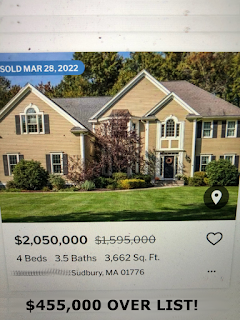 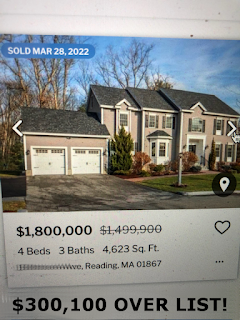 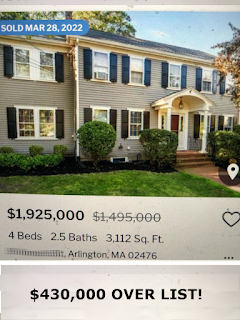 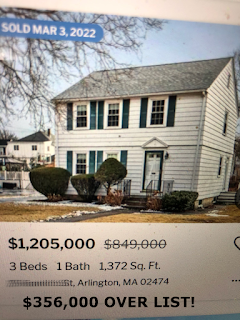 Notice that these homes, generally speaking, are fairly typical 3 and 4 bedroom homes (one 5) in the suburban Boston housing market.  From my perspective, these are NOT exceptional homes. They are the types of homes most middle to upper middle-class families should expect to be able to afford at some point in their financial life.

But look at the prices and, more importantly, the outstanding over-list bidding wars!

This is nothing short of insanity and there is NO WAY prudent due-diligence was properly exercised by the lenders during the appraisal and underwriting process of these transactions.

I believe that this anecdote is revealing the most important Achilles' heel of the latest cycle of booming real estate, namely, that private lenders fell back into the same trap as the Great Recession housing boom, over-lending with the assumption that residential real estate is immune from market downturn.

Buyers, for their part, clearly went hog-wild throwing nonsensical sums at bidding wars in an effort to win a property at any cost.  This is to be expected with inventories so low and mortgage rates so favorable over the last two years, but the gatekeeper to the sound financing of these transactions is the banking system which should have prevented such madness but appears to have, again, failed that systemically important function.

I have no doubt that we are about to witness a severe housing downturn as prices within property markets across the country briskly reset downward as the ongoing surge in interest rates continues.

It will take some time, of course, given the snails-paced speed with which transactions settle in the residential housing markets, but the lesson we will learn from this new Housing Bubble 2.0 is no different from what we learned the last go around, namely, what goes up, must come down!

Posted by SoldAtTheTop at 7:27 AM