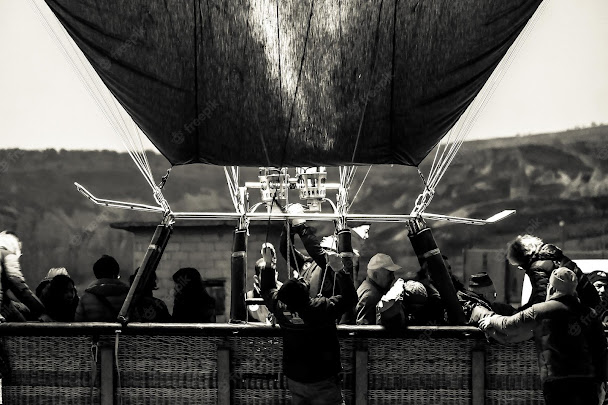 It is surprising how many macroeconomic commentators propagate the false notion that “quantitative easing doesn’t cause inflation” typically offering up some esoteric accounting of the Fed’s balance sheet or the difference between bank reserves and currency in circulation or the highly structured means by which the Fed implements QE or some other means of obfuscating, through needless complexity, the obvious goal of this unusual monetary policy tactic.

Let’s recount for a moment the reason the Fed began “quantitatively easing” in the first place.

Back in the fall of 2008, in the face of the almost continuous flow of horrific economic trends for housing and the wider economy and in the wake of the collapse of Bear Stearns and Lehman Brothers, the Fed finally “blinked” and went beyond their normal policy tools to engage the crisis head-on with an approach that was new to the American economic landscape, namely, Quantitative Easing (QE).

The following two articles (click for larger versions), published at the start of the Fed’s QE1, paint the picture well: 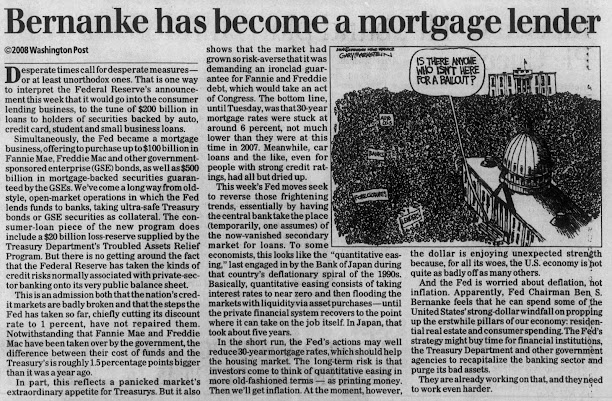 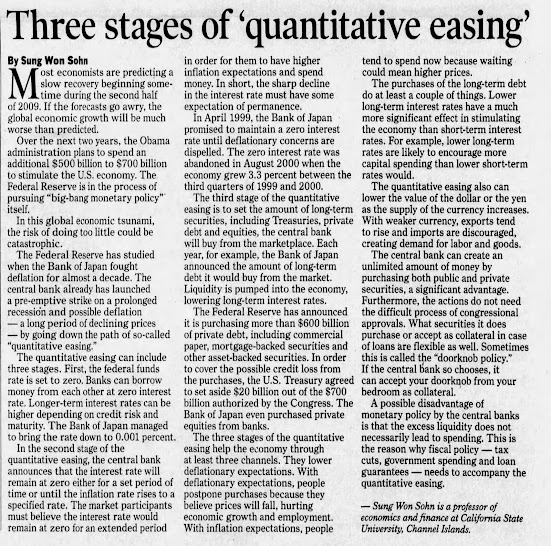 Note the air of crisis and desperation as American’s and those worldwide with economic interests tied to the American real estate markets were truly panicked over fate and fidelity of the American economy.

QE1 was a one-two punch of zero percent interest rate policy (ZIRP) on the short end of the yield curve (the Fed’s traditional Fed Funds rate policy) coupled with an ad-hoc targeted yield control tactic on the long-end by the Fed participating directly in the mortgage market through mortgage backed security (MBS) purchases from Fannie and Freddie, the large government sponsored entities (GSEs) that essentially make the conforming mortgage lending market.

It’s important to note that the Fed’s purchase of GSE MBS was NOT simply an effort to force mortgage rates lower but, by the fall of 2008, the mortgage market was essentially completely impaired leaving the Fed to literally step-in to replace the collapse in demand for these securities with their own artificial demand.

Losses coming from imploding sub-prime mortgages as well as near-prime and even prime were mounting steadily as vast swaths of new or recent home buyers (the top of the market buyers) decided to mail the keys back to the lender (jingle mail) rather than suffer the further downside coming from steadily falling home prices, thereby grinding the mortgage market to a halt.

This was a catastrophic outcome for the highly financialized and highly complex mortgage finance system and without the Fed’s artificial purchase of MBS re-liquefying the market in mortgage lending, home prices would have likely fallen on the order of 40%-50% nationally rather than the roughly 25% that the Fed successfully held it to.

So, put more directly, the Fed’s QE MBS policy not only work to depress rates for mortgages, it also LITTERALLY MADE THE MARKET for home loans from 2008-on as the Fed transformed from a lender-of-last-resort to, ultimately, a permanent fixture in mortgage finance.

By 2010 and on into 2011, it was becoming clear (at least to me here, here, here, and here) that QE was here to stay, a fact that would leave an indelible and fundamental mark on our economic landscape as our highly financialized debt markets would simply adapt to accommodate the Fed’s participation on an on-going basis, thereby allowing this falsehood to permeate deeply into the dynamics of the system.

In fact, it has been recently estimated that even today, roughly 30% of the overall U.S. mortgage market is directly financed by the Federal Reserve, a startling fact made even more alarming by the realization that the Fed’s QE was not just limited to the purchase of MBS but also Treasury securities thereby working to artificially finance Federal debt just like it worked to finance mortgage debt.

This level of support was not just done in an effort to simply fend off “deflation” (a specifically expressed goal of the policy) but also to evoke a “reflation” of the markets and bubbly conditions that existed prior to the crisis in an effort to blunt the trauma felt widely by firms and households thereby working to sure-up systemic confidence.

The result of all of this Fed action is pretty clear as the crisis steadily abated and confidence and sentiment gradually improved throughout the 2010s leading to a notable and lengthy bull market in stocks, a steady reflation of the housing markets and a major improvement in outlook for the economy more generally.

But this “reflation” was, in fact, a form of inflation as it is quite clear that price levels of most asset classes (and probably even consumer prices) would be much lower today had the Fed not stepped up to “rescue” our economy from this notable bout with deflation.

Further complicating matters, by early 2020, the COVID-19 panic circumvented the Fed’s initial attempt to walk back some of this extraordinary support again putting the it directly in the position of “savior” of the economic system, for which again it leveraged ZIRP and QE to do battle with a major economic crisis.

But unlike in 2008, the post-COVID economy was already replete with hot money having benefited from over a decade of historically accommodative easy monetary policy and almost euphoric attitudes coming as a result of ongoing stock market and housing market “wealth effects” on firms and households.

Now, with inflation clearly “unmoored” and with literally no easy pathway out of this maelstrom of economic insanity, the Fed and the economy more generally, will finally have to square off with the inescapable reality of this challenging period.

Posted by SoldAtTheTop at 7:39 AM