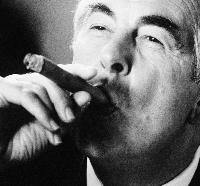 Listening to the Bullish banter aired on CNBC on Friday, one would easily be left with the impression that the Great American Consumer is a noble and unstoppable powerhouse, always prepared to take one for the team and spend the country into prosperity no matter what the circumstance.

Desperately grabbing for any number that could possibly be spun positively from the shockingly weak Q3 GDP report, Wall Street bulls zeroed in on the relatively strong “Real Personal Consumption” item which resulted in a 3.1% increase and additionally, the 8.4% increase to the “durable goods” sub-item that would, on the face of it, present a fairly confident posture of consumption of big-ticket, non-perishable products.

Undoubtedly, this 8.4% showing would seem to substantiate the general notion that consumers are unflappable, allowing nothing, not even an impending housing bust and possible recession, to get in the way of their flat-panel TV purchases.

But, how accurate is this analysis? Did the American consumer really increase their spending by 8.4% this last quarter on things like computers, appliances, and motor vehicles?

To find out, let’s delve into the “Durable Goods Report” released by the Commerce Department last Thursday.

First, the following chart (click for larger version) lists the results for items that fall squarely within the bounds of what would generally be considered a consumer product, that is, an item that would normally be purchased by a typical individual for personal use:

As you can see, there are lots of negative results for traditional consumer durables.

So where did the majority of that big 8.4% jump come from if not from electronic products, cars and appliances?

The answer lies in a single line item… New orders of non-defense aircrafts and parts for September.

Yes, you heard right, aircraft. After posting a 12.5% decline in July, and a subsequent 19.9% decline in August, aircraft orders unexpectedly jumped an astonishing 183.2% in September.

So, was this aircraft surge the result of equity laden homeowners using their HELOC winnings in order to finance their amateur piloting hobbies?

So, as it appears, we may not exactly be the big spenders the traditional media and Wall Street bulls are making us out to be and given that we are about to close out the second straight year where our disposable personal income is not sufficient to pay for our personal outlays thus leaving our personal savings squarely in negative territory, you should ask yourselves, are American consumers really unstoppable?

Copyright © 2006
PaperMoney Blog - www.paperdinero.com
All Rights Reserved
Disclaimer
Posted by SoldAtTheTop at 3:14 AM