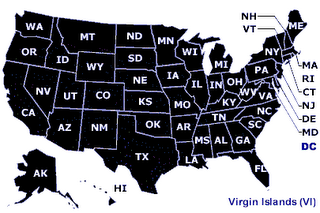 Trailing that supposition is usually the minor disclaimer that of course there are many regional markets that could very well be experiencing bubble like conditions.

Granted, the nations housing market is clearly an aggregate of several hundred regional markets many of which historically have never even exhibited cyclic price movements.

Yet, something about the argument seems to fall flat.

Could it be the way the “raging” real estate bulls such as David Lereah or Barry Habib use this simple line of reasoning all the while employing a host of national statistics to support their notion that the real estate market is “stabilizing” and will inevitably experience a “soft landing”?

How can you have it both ways?

If you discount the possibility of a national housing bubble based on the mere fact that housing is regional then how can you support the idea of price stability in the housing market by citing national statistics.

Let’s make it even simpler. If there is NO national housing market, than what good is looking at the national median home price statistic? That indicator has very often been cited by real estate bulls as an overall measure of the stability of the housing market.

How about pending home sales, housing starts or the myriad of other national real estate statistics?

The point is, if you’re not willing to accept the idea of the national market exhibiting a trend in the negative direction than the same has to apply for trends in the positive direction as well.

The key here lies in trying to establish the extent to which the country, in terms of its regional markets, is actually experiencing a housing bubble and to determine how many people and homes in those areas may be effected.

In an effort to gain some perspective lets look at the following sheet which lists some simple metrics for the current 16 top declining housing markets in the US. 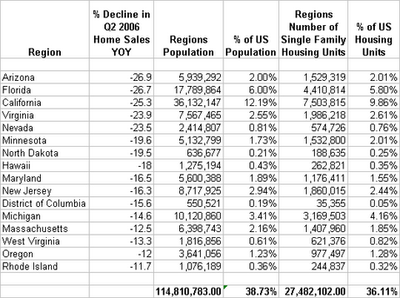 The population living in these regions total 114.8 million or roughly 38.7% of the total US population.

Keep in mind that the areas listed were only the “Top 16” out of an total of 28 states and the District of Columbia that showed declining sales in Q2 2006.

So as you can see, no matter how you look at it, nationally or regionally, the current housing slowdown is effecting a significant percentage of the US by population and by housing stock. In fact, so much so that we may soon see one or more months of declines to the national median home price, an event that has not happened since the Great Depression.
Posted by SoldAtTheTop at 12:51 PM