The Almost Daily 2¢ - Timing The Trough 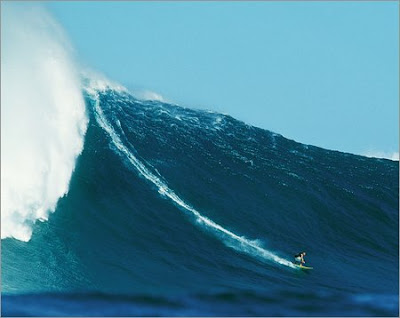 How many times have you heard real estate industry insiders say words to the effect of “you know, you can’t time the bottom”?

This notion has been so popularized that you may have even encountered it from non-realtor friends and family but what real evidence is there to suggest that you can’t actually time your home purchase to correspond, at least roughly, with the trough of a major downturn?

Housing Busts, like their prior Boom periods, typically take years to transition through the major sales and price corrections only to be greeted by a lengthy phase of “bouncing” along the bottom of the subsequent trough.

Further, there is ample evidence to suggest that although major housing downturns may trough during a post-correction clearing process, a resumption of actual growth requires at least some element of palpable growth in the real regional economy.

The point being that there is no real evidence to suggest that a regions housing market will simply “bounce-back” or show a “V” shaped recovery, especially in lieu of a real recovery for the major macroeconomic factors (income growth, declining unemployment, increased business activity, etc.) directly effecting the regions households.

The following charts show an estimation of the extent of the “bottom” of the 90s downturn for Boston and Los Angeles (click for larger).

Notice that for both Boston and Los Angeles prices bounced around the trough for over two full selling seasons… that’s a pretty good window of opportunity to stake out a fair purchase.

So what's the rush? 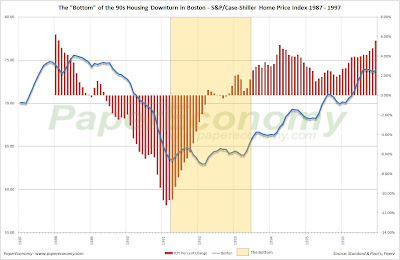 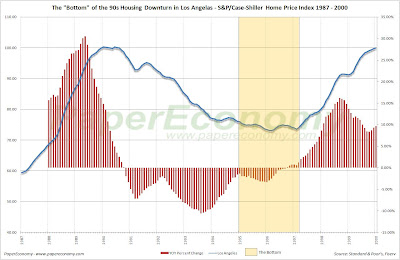 Posted by SoldAtTheTop at 2:42 PM