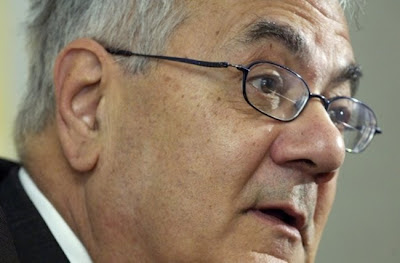 Regular readers may remember that back in March I had an interesting email exchange with Massachusetts Representative and House Financial Services Committee Chairman Barney Frank regarding the legislation allowing the government sponsored enterprises (GSE) Fannie Mae and Freddie Mac to increase substantially their conforming loan limit.

As part of my appeal I protested the increase of the GSE loan limits on the grounds that this form of reliance on these battered “linchpin” enterprises was unsound and would further erode investor confidence in their solvency requiring the federal government to step in and bail them out later this year as outlined in the following excerpt.

“Lastly, what I believe Congress and the President have done by enacting this provision is to introduce a substantial amount of uncertainty into an already wounded and fragile marketplace for agency securities.

Investors in agency securities not only know that the changes that have been enacted are unsound, they are now beginning to recognize the significant credit losses that will inevitably be associated to securities produced under even the prior, more restrictive, regulatory environment.

This recognition of instability has already affected GSE operations resulting in the highest yields on agency securities seen in 22 years thus driving up costs for all home-borrowers.

Although Congressional and Executive mandate apparently provide a dynamic and flexible environment for generating regulatory statute that suits the perceived whim of constituents (particularly in an election year), the “law of unintended consequences” remains largely rigid as it appears now quite clear that the main focus of Congress and the Administration later this year will be the federal bailout of Fannie Mae and Freddie Mac.” - SoldAtTheTop

To this Representative Frank not only took issue, he, in a sense, issued what I took as a challenge of sorts regarding the accuracy of our respective outlooks.

“I am glad to have your prediction that we will soon be engaged in a "federal bailout of Fannie Mae and Freddie Mac," because I disagree and this will give us some measure of the accuracy of our respective predictions in this regard.” – Rep. Barney Frank

Recently, reports have circulated suggesting that Fannie Mae and Freddie Mac are experiencing serious financial stress sending their common stock share prices plummeting and forcing their AAA rated debt to be treated as if it were five steps lower.

Worse yet, today former St. Louis Federal Reserve President William Poole suggested that a federal bailout may be on the way.

“Congress ought to recognize that these firms are insolvent, that it is allowing these firms to continue to exist as bastions of privilege, financed by the taxpayer,”

So the question is… why was Representative Barney Frank so horribly wrong and do you think he will admit as much when the time comes?
Posted by SoldAtTheTop at 9:03 AM