The Almost Daily 2¢ - Lost His Marbles? 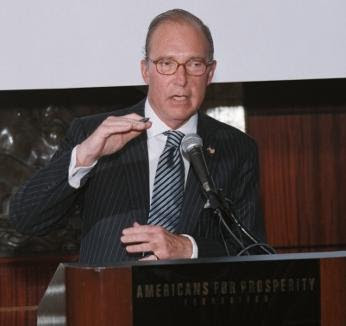 Larry Kudlow has simply lost touch…. and possibly his marbles too.

Typically, I tune in to Larry’s show for a dose of his trademark “Keeping America Great” or “Goldilocks Economy” Bullhoooey sentiment or even a segment or two including those complete fools Jerry Bowyer and Don Luskin, which, paradoxically, taken together seems to motivate me to keep blogging the data behind this epic crisis but last night’s show just seemed to cross the line into Kookyville.

First, Larry presented a couple of charts which, he alleged, showed that housing was in a process of bottoming and further, he suggested that this development was being ignored (with the implication of purposely ignored) by the media. 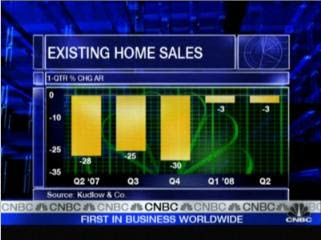 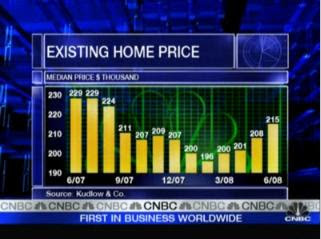 Upon closer inspection though, it appears that Larry mishandled the sales numbers and is taking a very short view of the selling price data.

It’s important to understand that the National Association of Realtors (NAR) has not yet published their quarterly existing sales results for Q2 2008 so Larry is likely using an average of the monthly data that has been published to date.

As PaperEconomy readers are already well aware, nationally, existing home sales have been falling steadily for several years now, forcing NAR economists to continually revise down their full year estimates so how is it that Larry’s chart shows that quarter-over-quarter existing home sales are only down just slightly?

By every existing home sale measure that the NAR publishes (single family, condo, combined) sales are way down compared to last year.

The following is the NAR monthly national single family existing home sales (Seasonally adjusted annual rate - SAAR) plotted since November 2005 AND a quarterly average of the monthly results since Q1 2006.

As you can see, year-over-year, sales are still off nearly 15% compared to last year. 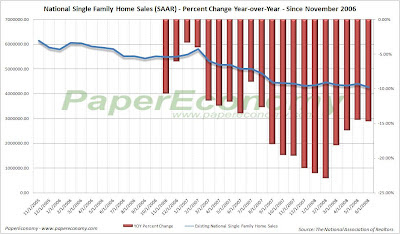 As for median selling price, Larry’s chart correctly captures the increase the median has seen since February but extending the data back a couple more years puts this rise in its proper context.

What we are seeing is simply the typical seasonal pattern of rising prices during the spring market and if past years are to be a guide, prices will resume their descent even more aggressively starting with either the July or August results. 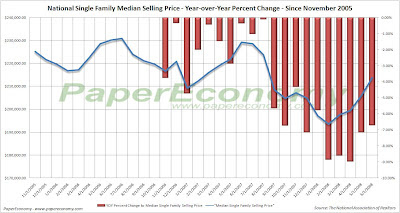 Has Larry reached some sort of breaking point?
Posted by SoldAtTheTop at 4:49 AM