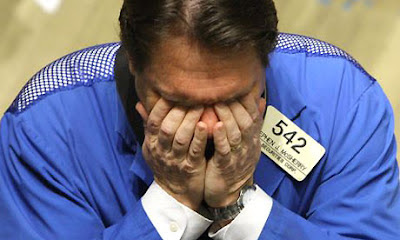 Intra-day, the S&P 500 has now broken well below the lows set in March during the emergency bailout of Bear Stearns.

As I have noted before, this bear market selloff has, thus far, been relatively orderly with only mild volatility especially when compared to past similar episodes.

The chart below (click for absolutely HUGE version) simply plots the percentage gained or lost (with moving averages) on consecutive up and down daily closings of the S&P 500 against the S&P 500 itself.

This provides another view of market volatility and, I think, better allows for the visualization of the “tug of war” that goes on between Bullish and Bearish forces.

Probably the most striking detail disclosed in this chart is how little volatility has occurred during this current bear market selloff.

After nearly eight months of decline, the volatility registered during this episode appears muted compared to period surrounding the dot-com collapse of 1998 – 2004 or even the S&L meltdown of the early 90s.

Though the current selloff has been orderly to date, I fear we may be entering a period where we could see a significant market crash.

The lows from the Bear Stearns panic have been breached, the Asian markets are significantly off their October highs, most major world economies are slowing, U.S. auto sales are hideous, retail sales (especially inflation adjusted) are continuing to decline, home prices are continuing to collapse, foreclosures are soaring, oil and gas and food prices continue to climb… the list is endless.

We are clearly in the midst of a complex and sustained financial crisis and the broader stock market averages have simply not accurately reflected that fact.
Posted by SoldAtTheTop at 12:31 PM