The Almost Daily 2¢ - Expect the Worst 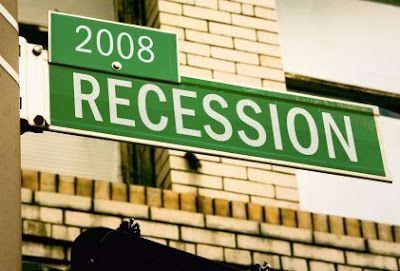 This is a long decline indeed and, in my estimation, it’s looking as though it will run longer and deeper than most, even today, expect.

A key to this outlook is the realization that the recent and dramatic rise in unemployment is essentially occurring late with respect to the general decline in housing (decline of the household) that commenced broadly in 2006.

Let’s remember that the very first regional housing market to turn sour (with declining prices) was Boston in the fall of 2005, and though it was barely noticeable to the typical homebuyer then, by early 2006 the housing “slowdown” was becoming mainstream news.

Throughout 2006 there was a fairly steady stream of information indicating that the housing decline was occurring nationwide with significant and widespread home sales declines and before the year was out, the first act of the decline would conclude with a massive crush of public homebuilders.

By early 2007 the stage was set for the second act, the mortgage industry implosion, as New Century Financial abruptly collapsed under the weight of its massive subprime liabilities and later Countrywide Financial essentially followed suite as the privately funded Jumbo loan market all but ceased to exist by mid-summer.

Finally, starting in early 2008, the third, fourth, fifth and so on acts were seen with Bear Stearns, the substantial worldwide collateral damage, Fannie and Freddie, Lehman, AIG, the global stock market crashes… on and on.

But throughout this long and slowly debilitating unwind, a key indicator of the general health of the U.S. economy, the unemployment rate, either declined or troughed out at, more or less, a historically low level as the broader economy continued to expand even in the face of such significant shocks.

In fact, it took until January 2008 to determine conclusively that the unemployment rate was experiencing a sustained increase.

So therein lays the rub… There is an absolute statistical (and logical) correlation between a rise in the unemployment rate and a rise in the most dreaded of housing decline effects… foreclosures… and we are only just now, after some three years of decline, seeing the level of unemployment that will truly feed this vicious circle.

Further, although the unemployment rate has been on the incline for some 10 to 12 months, past recessionary episodes suggest that this uptrend could easily last 20 – 30 months or even longer.

This strongly suggests that the majority of foreclosures have yet to come and, by whirling association, the nation’s housing markets, homeowners and finally economy will be on the downtrend for some time to come.

To better illustrate these points, I have created a few charts that put the unemployment picture and the correlation to foreclosure and home price declines in better perspective.

First, notice in the top chart (click for larger) that although the unemployment rate (blue line) has been rising dramatically lately, it was typical during past recessions for this rise to be sustained over a period of years. 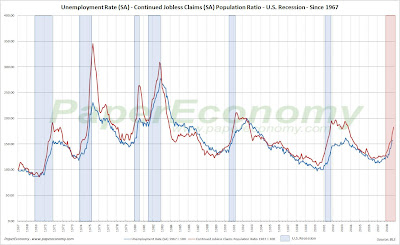 Now, consider the following charts of regional foreclosure counts, regional and national unemployment rates and home prices, plotted annually, for the Boston area (a good prototypical example of the unemployment conundrum) comparing the events of the 90s housing bust to that seen today (NOTE: 2008 figures are preliminary as they do not yet include November and December results). 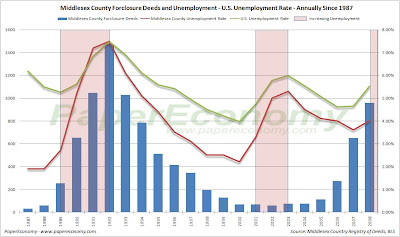 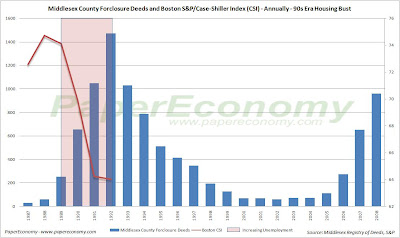 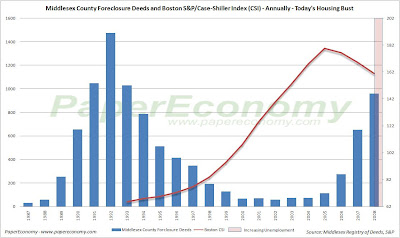 Notice that during the 90s bust, foreclosures in Middlesex County (a solid middle-upper middle and affluent class and mostly suburban county bordering Boston) started to make a noticeable jump “in-line” with the first year that the region experienced an increase in unemployment.

Another important observation is that during the dot-com bust there was a sustained rise in unemployment for both the region and nationally but no increase in foreclosure counts since, as you can plainly see by the last chart, anyone who could not afford to pay their mortgage during that recessionary period could simply sell their home at a healthy profit.

Finally, and what I think is the most significant point, notice that 2008 only marks the first year of increasing unemployment for both the region and nationally even though foreclosures have been mounting and prices have been dropping for three years.

This strongly suggests that home prices in the Boston area have yet to bottom out and that there will more than likely be some significant pain ahead for the region but, more generally, we have clearly reached the point where unemployment will seriously impact all the nations housing markets.
Posted by SoldAtTheTop at 9:42 AM