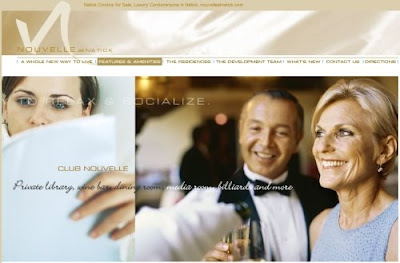 Longish-time Paper Economy readers will recall that I have, with great interest, covered various events and details surrounding the Nouvelle at Natick, an unusual “luxury” condo-retail hybrid development attached to the new Natick Mall in Natick Massachusetts (read here, here, here and here).

My fascination with the project might be a tad bit overkill but I suspect in time my initial sense will be borne out and all will judge the Nouvelle project as a crescendo of sorts… a final and lofty heave into the realm of delusional consumerism and pop-marketed luxury lifestyle and faux culture and elegance that will, in all likeliness, stand as testament to and a cautionary lesson on the risks inherent when mob-fantasy meets market speculation.

But rather than criticize the project yet again, today I bring you grim news that all is not well with its builder, General Growth Properties (NYSE:GGP), leading Natick town officials, concerned with tax revenues, “mall mitigation money” and ultimately the fate of the mall project itself, to believe that bankruptcy is in the offing.

Without digressing too far into the dirty details let it suffice to say that GGPs stock has lost 99% of its value in the last 12 months as investors, concerned over its enormous debt burdens and clear solvency issues, capitulated to its consistently collapsing share price.

But what does this failure say of the larger economy?

Although the specter of a GGP bankruptcy is obviously very unlikely to spur on any kind Washington bailout scheme, its collapse is no less systemically important in the sense that it both reflects the epic changes taking place in our rapidly decelerating culture of over-consumption and represents the plight of so many corporate entities that, after having spent the last eight years bounding far out on the limb of ultra-leveraged hyper-speculation, now face the harsh reality of being severed from the trunk with no means of escape.

GGPs predicament allows one a peek into one of the least recognized yet most destructive elements of our current predicament… the debilitating impairments that resulted from the prior era of speculative delusion which simply cannot be remedied.

You see, GGP is not a young company… it has been in continuous operation for over 50 years and effectively under the control of members of one single family.

Up until the year 2000 it would have looked just like any other consistent, dividend paying commercial REIT … safe and sound, not too high flying but income yielding and family run to boot… what more could one ask for?

But in the era of “easy money” GGP apparently found itself awash in possibilities, not for sound steady income, but for aggressive growth competing for the fruits of phony prosperity and the attention of “aspirational” nitwits.

Traditional malls and retail commercial real estate were no longer enough… in the era of competitive affluence and aspiration-through-consumption you must think BIG… you must build residential… you must marry residential and retail… living and shopping… luxury, exclusivity, consumption and lifestyle packaged into a conspicuous and smarmy convergent stew peppered with top-shelf retail brand identity, stainless steel appliances and granite countertops.

Or so it seemed.

The Nouvelle at Natick is a Frankenstein of its age.

A mad creation built in the likeness of the ideals of its time yet larger and more menacing and bearing all the telltale defects of a restless and overreaching mania.

Now though, the monster (along with other comparably atrocious projects) has turned on its maker and no amount of pleading or back-peddling can prevent the inevitable.
Posted by SoldAtTheTop at 8:25 AM