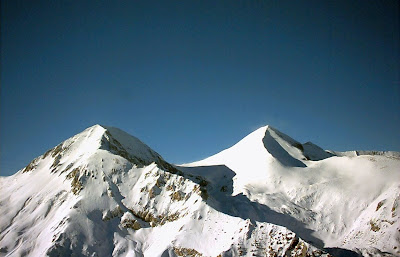 Subtitle: Capitulation is Not a One Day Trading Event!

We have significantly broken through the “dot-com” lows and soon, I believe, there will be a wider realization that the two bust periods (2000 to today) are actually one… one long secular bear market fraught with delusion and systemic speculation that will inevitably grind down to a much more humble yet fundamental level.

Yet, as the subtitle alludes, some will feel we have reached capitulation.

But, capitulation is NOT a one day trading event... Anyone who studies the charts below can plainly see that to be fact.

So one might ask, “Why is it that consensus on Wall Street still accepts phony simplistic notions?”

The answer, in my opinion, can best be expressed with more questions…

Why did it take Wall Street, the Fed and Treasury two years to (barely) accept the obvious severity of the uncontained housing decline?

Why did it take over a year for consensus to accept that we might be experiencing a significant economic contraction?

Why did Wall Street not see that the emerging markets, whose bread and butter was exporting cheap junk to U.S. consumers (who consumed on credit), would plunge along with us?

Why, as late as March 2008, did Barney Frank not see that Fannie and Freddie would collapse this year?

America is currently a leaderless land of competitive mass delusion.

We take something as dry and certain as collected macroeconomic data (home sales, home prices, retail sales, unemployment claims and industrial production) and breathe fiery partisan ideology into it.

It’s not enough to interpret the data in order to extrapolate curves and forecast likely economic trends… no… forget the data… we need to determine, based on your reading of the data, if you are pro-growth and pro-America… a pessimist (code words for lefty) or an optimist (code for righty)?

Worse yet, when we begin to finally see that the “writing on the wall”, another delusion takes over… we turn to government as if stimulus checks, bailouts, housing rescue bills and nationalization of our finance industry is the answer to all of our troubles.

As a result, this decline will likely run much longer than many think as these delusions wind down and we collectively accept that we are in a very difficult position.

To date, I believe we have merely lowed some of our expectations … not yet have we truly acknowledge the depth of this decline and how long and hard it will be to “right the ship” and rebuild both economically and politically.

As regular readers know, I have been following along the stock market decline for about a year now with this recurring “Twin Peaks” post whereby I simply charted some very basic technical analytics (somewhat ala the amazing Louise Yamada mixed with a couple of my own inventions) which compared the underlying average movement of the current S&P/500 index to its performance during the unwind of the “dot-com” collapse.

Be sure to study the charts well as they present several different ways of capturing market volatility and together compare past market performance to what we are seeing today.

I will continue to post the comparison to the “dot-com” era bear market for posterity but now that we have broken through the 2002 lows all technical similarities going forward have ceased… we are firmly in uncharted territory as the two bust eras are now one.

The “Percentage Up-Down” chart clearly shows that we have just entered a period of REAL volatility BUT also leads one to believe that we may have a long way to go in this market shakeout.

The “Up-Down Daily Closings” chart seems to indicate that although we have seen increased volatility and significant declines, we have yet to match the distribution of daily up closings and down closings (inverted red line). 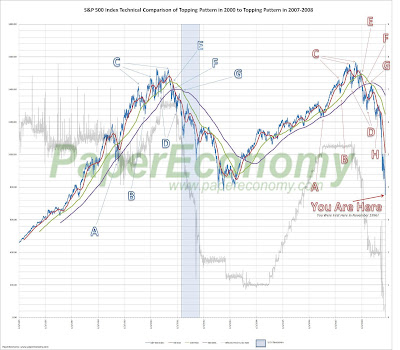 Posted by SoldAtTheTop at 10:21 AM