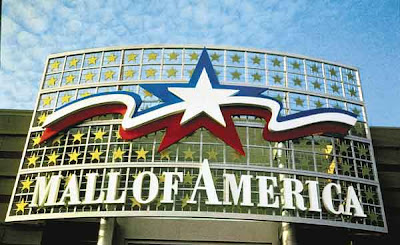 There has been growing speculation that the commercial real estate (CRE) markets will inevitably follow the lead of the residential markets down to a recessionary correction.

For an excellent background and thorough analysis read CalculatedRisk’s posts from earlier this year and more recently Professor Nouriel Roubini’s post from yesterday.

The notion of commercial real estate markets suffering a similar downturn as residential is both supported by historical correlations (e.g. residential and non-residential investment) as well as seeming to be an anecdotally logical outcome for a market that has seen similar levels of loose over-lending.

Fortunately, we need not speculate about the current state of CRE as the MIT Center for Real Estate tracks commercial property prices with a series of indexes that cover Apartment, Office, Industrial and Retail property types. 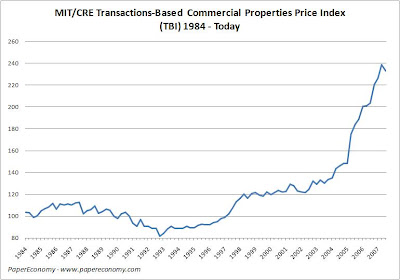 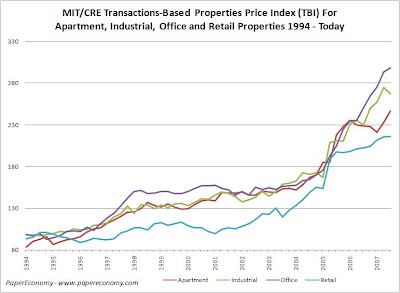 "The fall in our index is the first solid, quantitative evidence that the subprime mortgage debacle, which hit the broader capital markets in August, may be spreading to the commercial property markets."

Also, as you can see that not all components experienced such tremendous upward movement during 2005 and 2006 particularly Apartment and Retail, the two property types most directly exposed to the consumer.

In future posts, I’ll elaborate on the correlation between residential and non-residential fixed investment and add additional charts using MIT’s CRE supply and demand index data as well as the Moodys/REAL CPPI also produced by MIT/CRE.
Posted by SoldAtTheTop at 4:49 PM