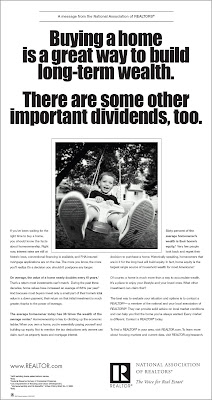 There just doesn’t seem to be ANY limit to the depths to which the truly underhanded National Association of Realtors (NAR) will reach in attempting to protect their own self interest.

Their new ad campaign, which apparently replaces last year’s ads promoting the absurd notion that “It’s a Great Time to Buy or Sell a Home”, shows (see ad above) what looks to be a 4 year old in a backyard swing with the title “Buying a Home is a Great Way To Build Long Term Wealth, There are Some Other Important Dividends Too”.

Along with the ludicrous “tug at the heartstrings” comes some “facts” to back up their claims ranging from “the value of a home nearly doubles every 10 years” and “the average homeowner has 36 times the wealth of the average renter” to the pièce de résistance… “the best way to evaluate your situation and options is to contact a Realtor”.

They are truly a desperate and reprehensible outfit.

What’s going to be next year’s campaign?

Possibly a cute little puppy being held firmly around the neck with snub nose pressed to its head and the tagline “Buy a home or this bitch dies!”

At this point, I wouldn’t be too surprised…

Am I alone in thinking that NAR’s attempts to persuade unsuspecting people into “investing” in a depreciating asset as large as a home, simply to serve the interests of their organization and its members is tantamount to fraud and should be prosecuted?
Posted by SoldAtTheTop at 10:16 AM