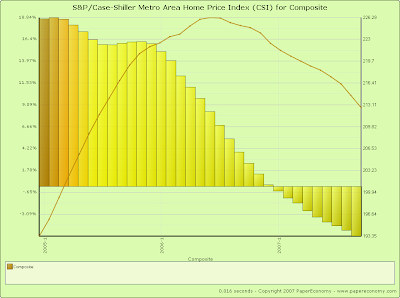 Today’s release of the S&P/Case-Shiller home price indices for September continues to reflect significant weakness for the nation’s housing markets with 13 of the 20 metro areas tracked reporting year-over-year declines and now ALL metro areas showing declines from their respective peaks.

Also, it’s important to note that Boston, having been cited as a possible example of price declines abating, has continued its decline dropping -3.18% on a year-over-year basis and a solid -6.42% from the peak set back in September 2005.

As I had noted in prior posts, Boston has a strong degree of seasonality to its price movements and with both the seasonal drop in sales and the recent stunning new decline to sales as a result of the disappearance of Jumbo and Alt-A loans, Boston will likely continue on yet another significant leg down in prices.

The following chart (click for larger version) shows the percent change to single family home prices given by the Case-Shiller Indices for September 2007 as compared to each metros respective price peak set between 2005 and 2007. 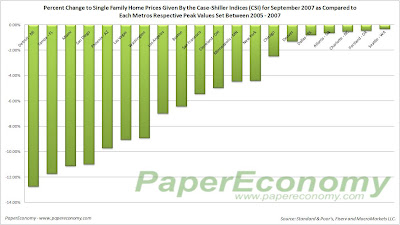 The following chart (click for larger version) shows the percent change to single family home prices given by the Case-Shiller Indices for September 2007 as compared to September 2006. 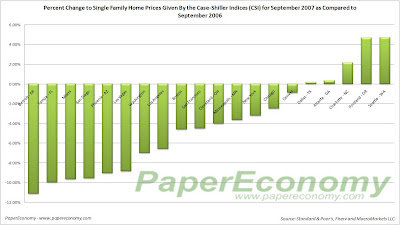 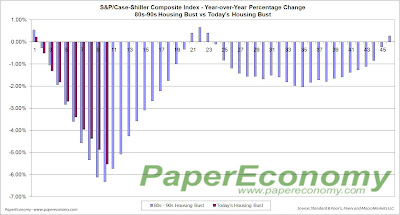 What’s most interesting about this particular comparison is that it highlights how young the current housing decline is, having only posted nine consecutive year-over-year (YOY) monthly declines to home prices.

Looking at the actual index values normalized and compared from the respective peaks, you can see that we are only fifteen months into a decline that, last cycle, lasted for roughly fifty four months during the last cycle (click the following chart for larger version). 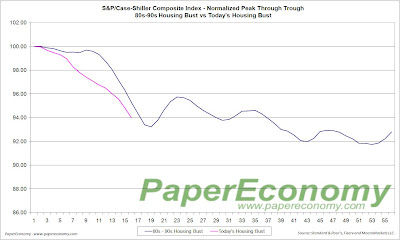 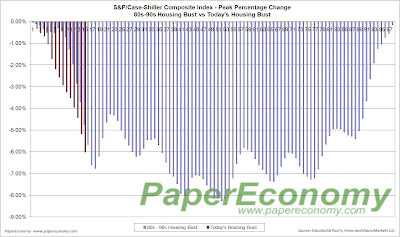 Notice that peak declines have been FAR more significant to date and, keeping in mind that our current run-up was many times more magnificent than the 80s-90s run-up, it is not inconceivable that current decline will run deeper and last longer.
Posted by SoldAtTheTop at 11:31 AM