Baron attempted to justify the articles contents and in so doing, he disclosed his poor and obviously unsophisticated abilities with even the most basic economic data.

October’s results again confirm that Arlington is by no means a “stand out” amongst its neighboring towns as Baron suggested in his email and, in fact, is following along on a path wholly consistent with the trend seen in the county, state, region and nation.

There are only three possible answers.

Sadly, I have now had this very article cited to me, even by complete strangers, on at least eight occasions.

Most recently, an 80 year old local architect who should have known better given his many years of experience with numerous past downturns, but who had unfortunately placed too much trust in a newspaper that now essentially publishes propaganda, recounted the article and its numerous "facts" about Arlington's booming housing market.

Additionally, in a truly grotesque but not altogether surprising turn of events, Realtors in Arlington are now handing out copies of this article (view hideous exhibit A and B below!) during open houses in yet another shameless attempt to bamboozle buyers into confidence and activity. 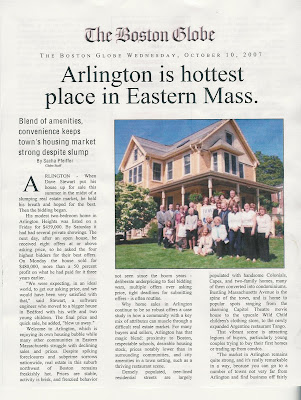 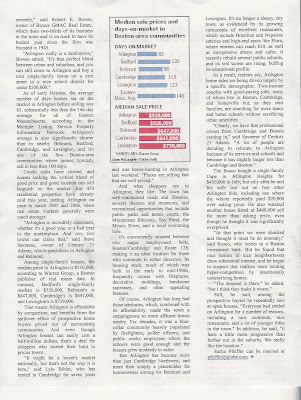 October’s raw results (as reported by The Warren Group) show us the following for Arlington.

As I had shown in my prior post, this data when charted and compared to other towns in the region proves there are absolutely no grounds to call Arlington’s market exceptional.

The following chart (click for much larger version) shows how Arlington’s median sales price has changed since 1988, the first year the data was tracked by the Warren Group. Notice that while the current monthly result is clearly the most jagged and volatile measure, all three (monthly, year-to-date, and annual) measures are essentially saying the same thing, namely median prices are going down. 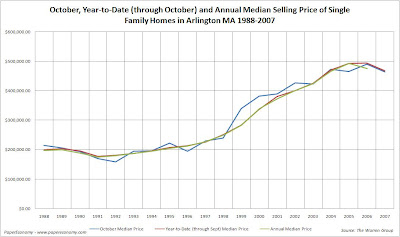 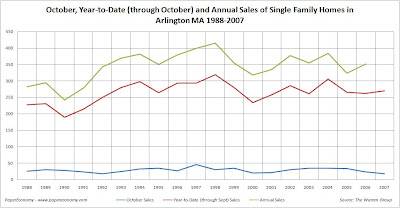 The final chart shows how the year-to-date median sales price for Arlington, Bedford, Belmont, Cambridge and Lexington has changed since 1988. Notice that each town is essentially staying on the same track having made great strides during the boom and now firmly headed lower. 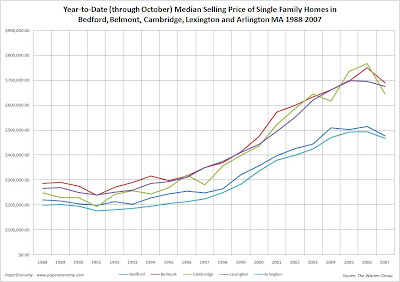 Please let editor Baron know what you think of this misstep.
Posted by SoldAtTheTop at 2:17 AM