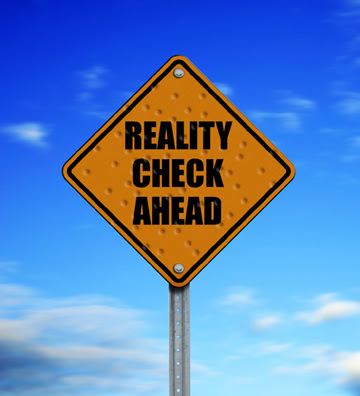 This week the National Association of Realtors (NAR) released their existing home sales report for the third quarter of 2007 showing, in truly stark terms, the tremendously broad nature of the housing downturn.

Single family home sales, on a year-over-year basis, are now falling in every state except for Vermont and North Dakota (see chart below and click for larger version and note that NH and Idaho don’t report sales data) and even those states sales growth are anemic. 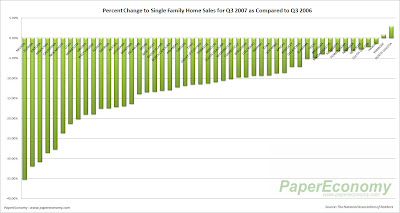 Amazingly, even given the obvious completeness of the housing downturn shown by their own data, the NAR’s newly appointed president, Richard Gaylord, blatantly continues the tradition of shameless self interested spin established by his predecessors.

“There is no such thing as a national housing market – it doesn’t perform like the equities markets, … What’s really important for consumers is to make informed decisions based on individual needs, desires and timelines in a given area. Most people plan to stay in a home for 10 years, and for buyers with a long-term view, housing is an excellent investment. … Even in most of the places that are undergoing a large price decline, long-term increases are quite respectable.”

More troubling, perhaps, is the Realtors inability to accurately portray the trend especially when comparing the current quarter’s home sales volume to that of the respective peak sales per state.

But as you can see from the charts (click for much larger versions) below, all states have peaked in their respective volume of single family home sales and are now declining with the most substantial decline coming from Nevada at 59.92% and the least coming from Mississippi at 3.29%. 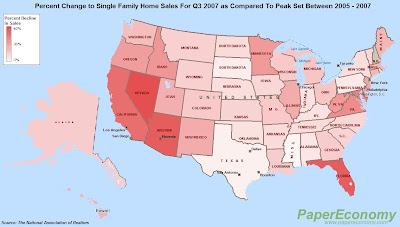 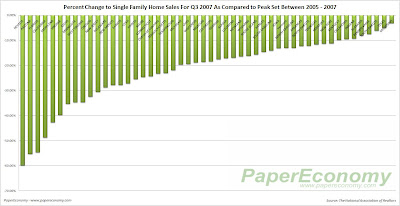 As for median selling prices, the NAR’s data (see chart below) also shows widespread weakness among the statistical regions they track.

Given that the majority of price declines have just begun to show in 2007, look for this price chart to continue to deteriorate in coming quarters.

Also, keep in mind that the NAR data only includes sales for MLS listed properties and given this limitation, the S&P/Case-Shiller index for each respective major metro should be considered a far more accurate price reference. 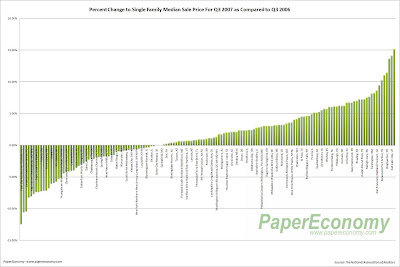 Posted by SoldAtTheTop at 3:35 PM