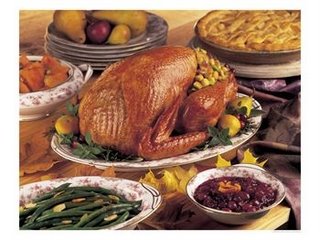 It's been a common practice in recent years for some in the real estate industry to attempt to calm any fears of an impending housing collapse by reciting some variation of the following theme:

“The housing market is not like the stock market... homes are not as liquid as stocks... Homes aren't traded like stocks.... A stock can drop in value to zero where a home has real measurable value...”

While these assertions are all essentially true, they tend to rely heavily on an overly simplistic view of the dynamics of the housing market and thus only portray part of the picture.

First, is it accurate to suggest that there is inherently a greater degree of price stability in the housing market versus the stock market?

For sanity's sake, Lets simply establish that housing prices can truly drop and in fact, fairly significantly even by standards commonly used by stock investors.

The following is a list of just some of the more notable price corrections occurring right now in greater Massachusetts and the Boston metro area: 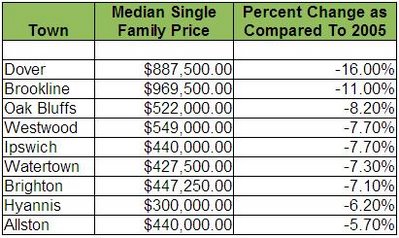 As you can see, two towns listed are already technically in “correction” as defined by having shown at least a 10% price decline while the others will likely follow.

So, although there was never a “Black Monday” style crash in which prices plummeted on a single day, home prices still declined considerably in the first nine months of 2006, a relatively short period of time given the type of asset.

Remember, home prices were still “rocketing” up the slope from 2004 to 2005 so the transition into such deep negative territory so soon in 2006 represents some fairly significant price movement.

To put this price movement in better perspective, think of how you would regard an individual stock or stock fund that you took a significant position in on January 1st only to find that by September 1st had lost 16% of it's value.

Now lets consider stocks vs. housing in terms of liquidity.

It's certainly true that stocks are more liquid than houses and thus can be traded substantially easier but does a low volume of assets being traded over a long period of time actually help to ensure price stability?

In the stock market, buyers and sellers can trade stocks at a frenetic pace. In most cases, each independent buyer and seller is acting in an almost anonymous fashion so the impact of any one trade on the psychology of all other individual traders is generally minimal.

Of course, there are exceptions such as big institutional traders taking up or selling big positions, but in general, retail stock traders are focused on the overall stock price not the price paid for the last 1 or even 100 shares.

In the housing market, as any seller in the above cited towns can attest, each individual sale price effects the price of all other homes since buyers and, in general, the whole real estate industry relies heavily on the “comp” method of valuing a home.

Using the “comparable” approach to home valuation results in a direct correlation of the perceived value, or loss in value from one home to the next and especially for homes in a close proximity.

So, although homes trade in low volumes, each home sale directly effects each other creating self reinforcing price movement that may appear dramatic both on the way up and the way down.

Additionally, it’s important to remember that prices are set by the participants that ARE actually buying and selling not by the ones sitting on the sidelines which brings up another interesting point.

In the housing market, many sellers must sell for reasons that are not strictly financial such as job change, divorce, and retirement. This effects the market in that participants are motivated to sell for different reasons and in some cases this motivation can lead to price cutting that might be perceived as irrational as individual sellers make choices that suit their own lives.

Sure, in the stock market there are certainly going to be trades that happen as a result of a couple splitting up and liquidating their assets in order to go their separate ways but as you can imagine, the effect of that individual sale would most likely be minimal to the overall stock price.

Lastly, lets consider the effect of loss in value of a home.

Its important to remember that even though a home has intrinsic value, the so called “replacement” value of the house and the inherent value of having exclusive rights to the property, loss of value is loss of value.

Many wrongly think that a home hasn't lost value if it has experienced declines that are less than recent increases to it's appreciation. But the fact is, any loss is a real loss in value. Sure, the house may still have equity but if it has dropped in value you have less.

Housing wealth loss and it's effect on consumption has been the subject of study on several occasions in recent years most notably by Karl Case, John Quigley, and Robert Shiller in their widely read paper “Comparing Wealth Effects: The Stock Market Versus The Housing Market”.

Their findings concluded that “...changes in housing prices should be considered to have a larger and more important impact than changes in stock market prices in influencing household consumption in the U.S. and in other developed countries.”

Posted by SoldAtTheTop at 2:31 AM