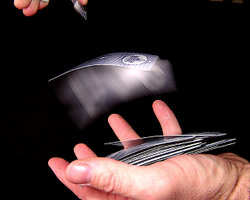 Today, the Office of Federal Housing Oversight (OFHEO) announced some truly specious changes to their existing procedure for determining the “conforming” loan limits used by Freddie Mac and Fannie Mae.

The conforming loan limit, which currently stands at $417,000 for a single family home, defines the maximum loan amount that a government sponsored enterprise (GSE) can buy or guarantee, leaving any loan in excess of the limit to be considered "non-conforming" or a "Jumbo" loan which, being held by a non-government organization, typically will carry higher interest rates.

In years past, the procedure for determining the conforming loan limit has been to apply the October year-over-year percentage change in the average home price, published by the Federal Housing Finance Board (FHFB), to the current maximum limits for the subsequent year.

As anyone who has refinanced a home recently can attest, the limit for a conforming loan has increased rather dramatically in the last five years allowing many home owners to refinance out of their existing Jumbo loan to a lower rate conforming loan as the OFHEO limit surpassed their original loan amount.

Now though, in the face of the first decline to the FHFB average home price in more that a decade OFHEO’s director, James B. Lockhart has seen fit to change the process by which the limit is determined citing concern for ensuring “…an orderly and transparent process for any downward adjustment,".

Apparently, this concern was not present for the many upward revisions to the limit during the Bubble years, allowing many millions of borrowers to take full advantage of the credit worthiness of the United States government through their reliance on ever expanding, GSE backed loans.

OFHEO now plans to hold the limit steady for all of 2007, deferring any downward revision, even if the average home price should continue to fall.

Better yet, if for some reason, the October average home price should increase, Lockhart has stated that OFHEO will ACTUALLY INCREASE the limit by that percentage as they have in past years.

Furthermore, If the October 2007 average price should decline again, then the 2008 limit will finally be revised down but by “at least” the percentage change in 2006.

It’s not exactly certain what the term “at least” really means but it appears that this supposed attempt to clarify the process of setting the conforming loan limit has now been greatly obfuscated.

Posted by SoldAtTheTop at 5:45 PM