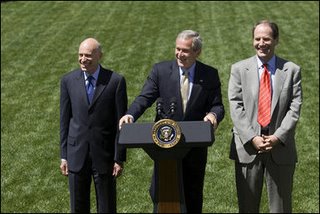 Today, the White House downgraded it's economic outlook for 2006 and 2007 as a result of the unforeseen severity of the nations housing bust.

"The housing market ... it has been hit, I think, harder than most of us had expected. Most forecasters were expecting a slower decline," Edward Lazear, chairman of the White House's Council of Economic Advisers, told reporters going on to state "Whether it's bottomed out now is still up for grabs,"

Watch CNBC's coverage of the downgrade on BNN now!!.

Posted by SoldAtTheTop at 3:58 PM