It appears that yesterday, The Boston Globe finally completed the National Association of Realtors (NAR) training course titled “how to become a willing shill for the real estate industry in… 90 days or less!”.

Of course, it did take them a little longer… but, come on… these are staff reporters and section editors we are talking about here!

You might remember that about a year ago, the Globe published an article titled “End of housing decline near?” with the summary line “Drops in price and sales moderate, hinting market may be starting to stabilize” within which reporter Kimberly Blanton quoted a host of real estate insiders who, in typical fashion at the time, portrayed the housing decline in Massachusetts as having shown signs of stabilization.

When I called her on the obvious disconnect between reality and her reporting (during a live moderated Boston.com chat) and asked her directly how she was able to responsibly report that there were "signs of market stabilization" she replied:

“That's a great question. Frankly, an editor threw that in & I'm not sure why.”

Well, it seems now that other Boston Globe “reporters” want to get in to the act.

No… this isn’t a retelling of the wild and bubbly days of 2000-2005… The Boston Globe is reporting that this is occurring right now!

The article even goes so far as to suggest that Arlington, a nice clean and well placed Boston suburb, is currently “enjoying its own housing bubble while many other communities in Eastern Massachusetts struggle with declining sales and prices.”

Seem fishy to you? It should.

After doing a little fact checking of my own (against MLS sales data), I’m left utterly speechless at how a supposedly celebrated national newspaper could report such absurd and fictitious information. Taking into account the fact that Arlington has seen an average of 50% of all listed single family homes have price reductions (currently 55%), the sheer number of homes still selling under list is staggering.

Still further, the year-to-date median selling price for a home in Arlington is in fact $465,500, the lowest seen since 2003, according to the Warren Group NOT the $510,000 as reported in the article.

In fact, I don’t see where the Boston Globe got the $510,000 figure as it doesn’t match the median number reported for the year-to-date figure, the latest reported month or the current calendar year. 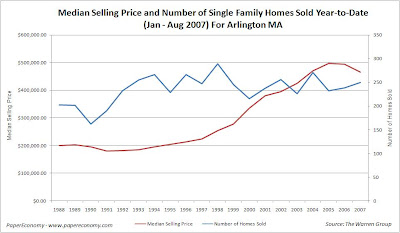 As you can see from the chart, the median price is coming down while the number of homes sold has remained nearly constant for the last 15 years.

Arlington is a nice town… It’s clean and prosperous with many young families and a good location BUT none of that justifies writing a baseless article that distorts and even fabricates statistics in an effort to create an atmosphere of exuberance.

I’m calling on the The Boston Globe to publish a complete retraction placed in a comparable position to the fictitious article published yesterday and to cease and desist functioning as the loudest part of the NAR/MAR propaganda machine.

I’m sure that making the advertisers happy is important but not nearly as important as getting the story and the facts straight.

Be sure to let The Boston Globe's Editor know what you think of his shoddy paper.
Posted by SoldAtTheTop at 1:22 AM