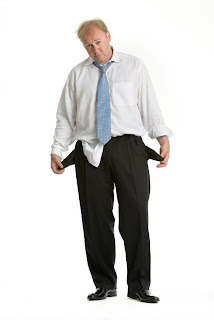 Last Friday, the Commerce Department released their monthly Retail Sales Report for September which continued to show an interesting correlation between declining consumer spending, particularly on discretionary items, and the decline in home values.

As in past months, I have isolated the primary discretionary retail sales categories into a single “discretionary” retail sales series, and then charted the year-over-year percentage changes since 2000.

As a result of reader feedback (particularly by Deejayoh) I have modified the approach of merely “eyeballing” the presumed correlation and instead used a Pearson correlation to provide a true statistical view of the data.

The result is a reasonable and even significant correlation between the deceleration, and now outright decline, of home prices and a deceleration and subsequent decline in discretionary consumer spending.

This month I have updated the analysis by using a 3 month moving average for both the CSI series as well as the discretionary retail sales series.

The CSI is calculated monthly based on home sales that could have been settled as far back as three prior months so the smoothing should serve to better align each series.

Keep in mind that the analysis is STILL assuming completely coincident changes to home values and to consumer spending which is likely not a good assumption as most homeowners would likely pull back on spending after the realization that home values have declined.

In a upcoming post I will attempt to shift the housing price decline further into the future (or spending into the past) following an assumption that declining prices are “leading” the declining spending but for now the correlation on the rates of change are still significant.

First, in order to get a sense of the original presumed correlation, take a look at the chart below showing the year-over-year percentage change to both the S&P/Case-Shiller Composite Index (measuring home price change) versus my “discretionary” retail sales index (measuring retail sales change).

Note that the chart shows that during the period from January 2001 to June 2003 retail sales faltered a little as the effects of the dot-com recession worked to dampen spending but that housing remained at exceptional rates of appreciation.

Notice also that from July 2003 to January 2006 both measures show exceptional, and possibly related or correlated growth that then seemed to also decline in tandem in early 2006 with the retail sales component having generally remained either negative or dampened similar to the rates seen during the last recession.

Next, let’s expand the chart a bit to include the full range of available data starting in January 1993 and running all the way through the latest month where both series have data points in July 2007.

Notice that in general, the rate of change of the two series do not appear to be very well correlated and, in fact, that during the tail end of the last housing recession in 1993, retail sales was growing strongly while home appreciation floundered along the bottom until 1997.

Also note that while growth (or lack thereof) of retail sales was clearly dampened during the dot-com recession, home price appreciation seems to have been little effected. 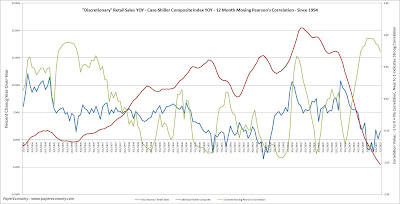 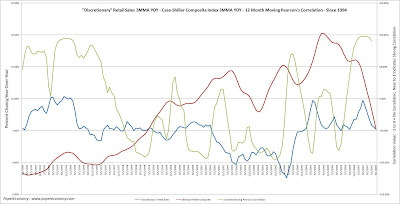 The final charts attempt to correlate the year-over-year rates of change of the underlying data series and 3 month moving average of those series by using a moving Pearson's correlation to determine the degree of correlation.

As you can see there is little consistent correlation (negative to low positive indicates no correlation, 50, 80 to 100 indicate good, strong to perfect correlation) between the rates of change of these series but that having been said, the best correlation to date has been in the trend seen since 2006.

Although the correlation has weakened a little as home prices continue to slide and retail sales has at worst flattened, this current existing correlation would be interesting to watch over the coming months.

If a measurable pullback continues to occur in discretionary retail sales, this correlation will persist, leaving us to possibly conclude that there is a direct effect between the latest decline in home values and consumption of discretionary items.
Posted by SoldAtTheTop at 9:58 AM