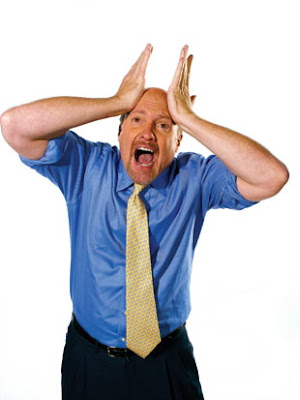 As much as I can’t stand that clowny sound effect slapping goon Jim Cramer (witness his ridiculous buy buy buy rating on Countrywide Financial back in March), I couldn’t help but cheer “BOOYA!” during his NBC rebuttal debate with the National Association of Realtors (NAR) President Elect Charles McMillan.

Cramer easily dispatched with McMillan by cleverly pulling a couple of notes from his pocket, one from an Realtor angry enough with the prior Today Show appearance to threaten choking, the other, one of NARs preposterous “market is bottoming” press releases from last year.

That was really the perfect way to demonstrate the level of vicious underhandedness NAR is capable of when seeking to protect its association interests.

The Housing market starts to collapse… no problem just flood the traditional media with multitude of ginned up housing forecasts.

Popular Wall Street figure states the obvious on national television… threaten to choke him if he ever does it again.

It occurred to me a while back that there was something significantly different between the NAR and its counterpart in the “new” home market the National Association of Home Builders (NAHB) that I think might be worth reflecting on.

David Seiders, Chief Economist for the NAHB, while remaining fairly optimistic in tone throughout 2006 and even on into 2007, made an abrupt turnaround during the initial months of the subprime debacle.

What seemed apparent was that as Seiders digested the fallout and spillover effects of the mortgage crunch, particularly as it was reflected in the homebuilder sentiment surveys he produces monthly, he faced the reality of the current market conditions and accepted it for what it was.

The NAHB even went so far as to abruptly change their annual Construction Forecast Conference to reflect a “stormy weather” theme where they handed out prop umbrellas to attendees taking a self-effacing comical approach to an obviously gloomy outlook.

Furthermore, every Seiders appearance on CNBC, Bloomberg or elsewhere since the mortgage meltdown has come with a reasonable, even solid, dose of reality, a feat that seems unimaginable for the NAR leadership.

So how could two associations that perform the same function in essentially the same industry take such a different approach to interpreting the current data and forecasting the future of the housing recession?

I think the answer lays in the fact that NAR, as an organization, is simply an expression of the inherently unscrupulous nature of real estate brokering.

It is an industry that, while feeding on peoples basic need to have and want to own housing, plays off the typical persons (seller and buyer) emotion and general lack of knowledge in order to siphon off as much commission in as little time as is possible.

NARs approach has been consistent with the “make the deal” attitude of its members except that in their case they are attempting to bamboozle the whole country into ignoring the turmoil that surrounds them.

The housing markets are now firmly in an obvious, almost textbook correction after years of unprecedented appreciation.

In most (soon likely all) of the country, if you buy a house today, it will be worth less next year and likely less even more for years after that.
Posted by SoldAtTheTop at 12:05 AM