The Gloves Come Off! 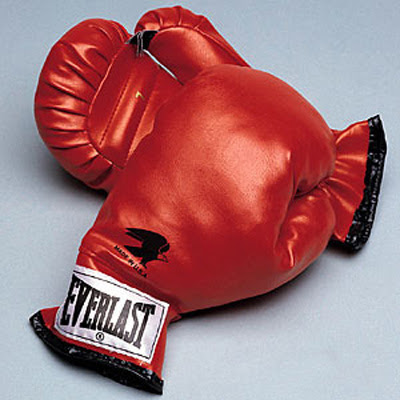 In addition to putting together yesterday’s post on the ridiculous “market is hot in Arlington” article, I fired off the following email to Martin Baron (and others), Editor of the Boston Globe:

I implore you to read the article at the following link and then publish a retraction. Also, you might want to look over your "reporters" shoulders from time to time... you know... do a little editing every so often.

P.S. I'm emailing this link to other media outlets as well...

A little snarky I know but the fact remains that the Arlington article was a true absurdity and I hardly believe that I’m alone in feeling near outrage over it.

Well, I did in fact elicit a response and I thought I might share it with PaperEconomy readers along with my in-line retorts (in bold).

This post should function as a decent counter response that I will email to Mr. Baron.

Thank you for your email. This story was initiated not at the suggestion of a realtor, but by a reporter. We do not kowtow to the interests of advertisers, potential advertisers, or industry groups. The Arlington story was published in the context of dozens, if not hundreds, of previous stories in the Globe on the generally weak housing market.

[
I take it back… the Boston Globe is not pandering to real estate advertisers… it is PART of the real estate industry.

Just take a look at the Boston.com real estate section.

The Boston Globe has a direct relationship with real estate financial information firm the Warren Group and TOGETHER they sell home reports for virtually any home in the region. You buy them right through the Boston.com website.

The Globe also hosts MLS searches right on their main real estate web page which means they have established a significant relationship with the MLS Property Information Network (MLS-PIN) which owns the data.

Why is this important? Because this is not mere advertising.

With the property search and all of the associated tools and accoutrements (town stats, open house postings, mortgage rate lookups, embedded videos etc.) they are actually assisting buyers in ferreting out inventory and in nearly every aspect of the sales process.

Yes this is probably good for the consumer… the tools are useful but the fact remains that these are not mere Sunday sections or even banner ads…. we are in a new era of advertising.

These tools represent a nearly complete synthesis of news media and consumption where you literally read news and can simultaneously participate in buyer or seller activity in the same dynamic frame of reference.

Mr. Baron, you can talk editorial independence and separation from advertisers all you want but is it really likely that this hyper confluence of real estate business and media interests plays NO role in editorial decisions?
]

The story's basic premise – that the market for single-family homes in Arlington is unusually robust amid a nationwide housing slump – is supported by statewide real estate data, as well as by multiple interviews with buyers and sellers in the Boston area.

[
The interviews were anecdotal and the data absolutely does NOT support the notion of “unusually robust”.

Yes the August median selling price figure you quoting (apparently recently revised from $510,000 to the $506,000 currently reported by the Warren Group) is on par with August of 2005 and near August of 2004 but what you apparently don't understand is that August settlements capture sales that originated in during June and July, easily the busiest selling months of the year.

This tends to make the August median selling price result volatile and not nearly as representative of the annual median price which is the price that actually matters.

No one quotes just the August value when referring to median selling price… they quote the annual.

Look at the following chart for Arlington and you can see what I mean. 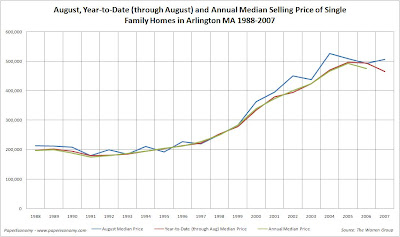 Notice that the August (blue) trend line is the jerky and erratic especially compared to the (red) year-to-date through August and the (green) annual lines.

Notice also that, in general, the year-to-date through August is a decent predictor of the outcome of the annual result whereas the August median value is generally quite poor.

Notice also that in 2006 neither the August or the year-to-date through August was a good predictor for the annual result as the median selling price in Arlington accelerated to the downside during the fall months.
]

The story acknowledges that condo sales have slowed, that houses can still languish on the market, and that while Arlington is affordable relative to surrounding communities, homes there can still easily cost a half-million dollars. But the fact remains that Arlington distinguishes itself in eastern Massachusetts by both days-on-market data and median sale prices.

[
Day’s on the market is at best a very rough way to judge market activity as it is really a byproduct of the MLS listing and not actual market performance.

Of course, in a perfect world, a market full of homes that after being listed with a listing services (like the MLS) stay there racking up “days-on-market” until being removed as a result of a purchase would actually be a good indicator but anyone who has actively watched a town’s inventory knows that that’s not the case.

In reality, homes are removed and re-listed frequently for many reasons by both Realtors and sellers.

This skews the number and although it still serves as a rough guide to activity, Arlington’s 83 day average is certainly nothing to get exuberant over.

As for the median selling price… see above.
]

As of October 5, the median sale price for single-family homes in Arlington was $510,000 in August, the most recent month available from the Warren Group – and a traditionally slow month for house sales. In the past week, that number has dipped by $4,000 due to updated Warren Group data. The data is updated constantly.

[
No. Sorry Mr. Baron, the August results represent the highest monthly sales for the year.

It’s important to keep in mind that the sales results captured in August are from purchases that generally originated in June and July and possibly the very first few days of August.

Remember, buying a house takes time and The Warren Group captures the data after it has been finalized by a deed transaction at the registry.
]

The year-to-date median sale price for single-family homes in Arlington is $465,500 as of this afternoon. By that measure, too, Arlington is a standout in eastern Massachusetts. It is also a standout compared to the neighboring communities cited in the story – Bedford, Belmont, Cambridge, and Lexington. Sales data indicate that Arlington’s real estate market was extremely busy this summer, resulting in a higher median sale price in August. As a result, Arlington is on track this year to match and perhaps exceed its busiest-ever year for home sales, 2004.

[
Again, you are expressing an obviously fundamental misunderstanding of the data.

You are treating home sales as if they inflate like the selling price.

In terms of a single town market, there is a relatively fixed housing stock, similar numbers of population, similar household formation and relocations in and out of the town all resulting in a fairly stable numbers of home sales.

Of course there could be a significant period of slowing that would possibly take things down a notch but as you can see from the chart below, even the mortgage-mania that occurred between 2000 and 2006 barely registered. 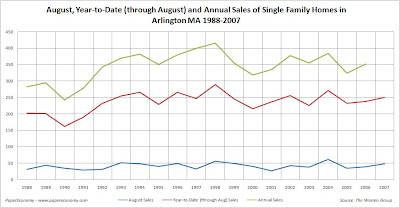 Further, I don’t see how this is the “busiest-ever” year… doesn’t it look flat to you?

Additionally, I take exception with your notion that, in terms of year-to-date
median selling price, Arlington is a “standout” amongst eastern Massachusetts towns like Belmont, Bedford, Cambridge, and Lexington.

Look at the following chart of year-to-date median selling prices for those towns and see if you can explain how you arrived at the term “standout”. 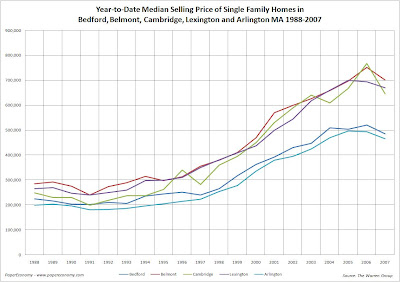 Normalizing each towns results to a base of 100 makes the fact that the sharing the same experience even a bit more clear. 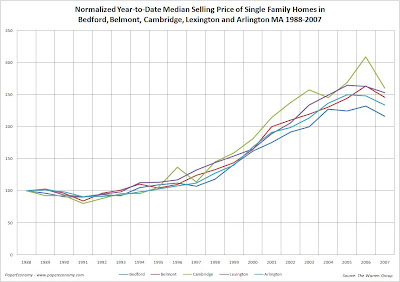 The towns are all essentially following the same path, namely up the boom years and now… heading down again.
]

Regarding the percentage of Arlington homes that sell under listing price:
This data cannot be examined in a vacuum. Without comparing it to data in surrounding cities and towns, and to historical data in Arlington, the figure has little meaning. Even in strong housing markets, homes sell under asking price. That any houses would sell above list price in the current statewide and national real estate market is remarkable.

[
Zip (i.e. use ziprealty.com) any town inside 128 and the number of homes with price reductions is roughly 50% INCLUDING Arlington (at 55%).

Sellers have been reducing prices just to lure buyers into making below list offers on 66% of all sales and list-to-below-list on 90%.

That's significant and it's a good barometer of the depth and breadth of the downturn.
]

Mr. Baron, originally you published an article that had incredibly poor quality of information with at best a few anecdotal stories supported by numbers that your reporter knew not how to interpret.

Now, you yourself defend the story with an even worse level of understanding.

I have made my case and I’m repeating my demand that you publish a complete retraction placed in a comparable position to the absurdly poor article published on Wednesday and further to cease and desist promulgating such poor quality “news”.
Posted by SoldAtTheTop at 1:24 AM