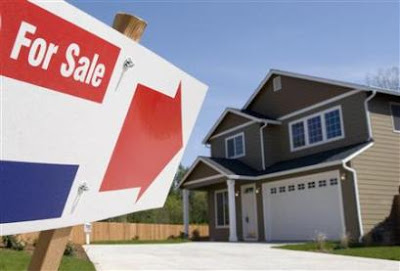 Today, the National Association of Realtors (NAR) released their Pending Home Sales Report for August 2007 showing yet again a truly stark and horrendous continuation of the historic decline to residential housing on a month-to-month and year-over-year basis, both nationally and in every region.

We are now firmly heading down the second slope of the pullback in residential housing demand with the Northeast, Midwest, West and the National regions having now fallen as much as 20% BELOW the seasonally adjusted home sales activity recorded in 2001, the first year Pending Home Sales were tracked.

As usual, NAR Senior Economist Laurence Yun takes another crack at false optimism again suggesting that the circumstances for Jumbo loans will return to “normal” thus restoring sales activity later in the fall.

“Fewer contracts were being written because of mortgage availability issues, and a separate internal survey of our members shows more than 10 percent of sales contracts fell through at the last moment in August, primarily the result of canceled loan commitments, … The volume of activity we’re seeing today is below sustainable market fundamentals because some creditworthy people are trying to buy homes but can’t because of the credit crunch.

“The impact was greater in high-cost markets that are more dependent on jumbo mortgages. In some areas, as much as 30 percent of signed contracts were falling through in August when the credit crunch problem peaked, … The problem has since become less severe, though jumbo loan rates are still higher than they would be under normal conditions. Therefore, sales activity in late fall will better reflect market fundamentals.” 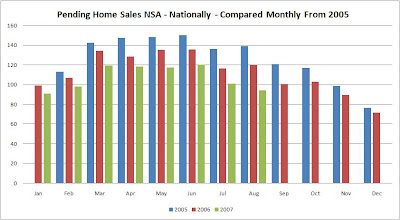 The following chart shows the year-over-year changes to the national Pending Home Sales index as well as comparing the latest results against the values seen in the peak year of 2005 (click for larger version). 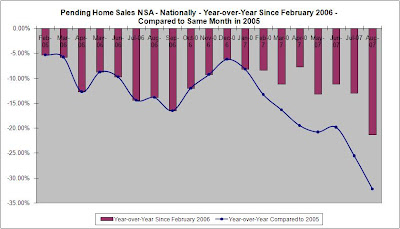 Note that in the above charts, I had to use the Not Seasonally Adjusted (NSA) data series as NAR changed the methodology for their Seasonally Adjusted (SA) series a while back and never republished the numbers. This is why none of the data appears to be breaking below a value of 100 because it’s the SA series that is now below 100.

Look at the August seasonally adjusted pending home sales results and draw your own conclusion:

So it appears that, year-over-year, contract activity is still dropping rather sharply with ALL regions continuing to show significant declines.
Posted by SoldAtTheTop at 9:29 AM