This post will be the first in a series recurring monthly that will track the latest results of the housing market seen in Arlington Massachusetts.

I’m choosing Arlington as a result of the Boston Globe’s recently published and absurdly anecdotal and ludicrous farce about the town’s “hot” housing market.

Baron attempted to justify the articles contents and in so doing, he disclosed his poor and obviously unsophisticated abilities with even most basic economic data.

I will add that I believe that this particular episode is truly representative of both the effects that advertisement has on a major media sources’ editorial process as well as the effect that its farcical result has on the public.

To that end, any of you Bostonians with stories of unaware citizens blindly recounting the details of that article please leave the details below in the comments section.

September’s raw results (as reported by The Warren Group) show us the following for Arlington:

As I showed in my prior post, this data when charted and compared to other towns in the region proves there are absolutely no grounds to call Arlington’s market exceptional.

The following chart (click for much larger version) shows how Arlington’s median sales price has changed since 1988, the first year the data was tracked by the Warren Group.

Notice that while the current monthly result is clearly the most jagged and volatile measure, all three (monthly, year-to-date, and annual) measures are essentially saying the same thing, namely median prices are going down. 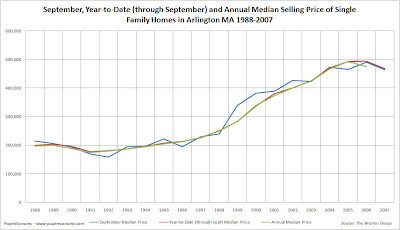 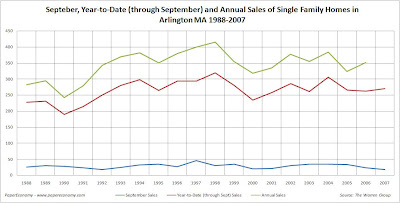 The final chart shows how the year-to-date median sales price for Arlington, Bedford, Belmont, Cambridge and Lexington has changed since 1988.

Notice that each town is essentially staying on the same track having made great strides during the boom and now firmly headed lower. 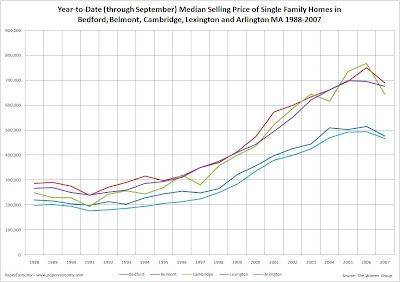 Please let editor Baron know what you think of this misstep.
Posted by SoldAtTheTop at 8:38 AM