Going The Way of The Cordwainer 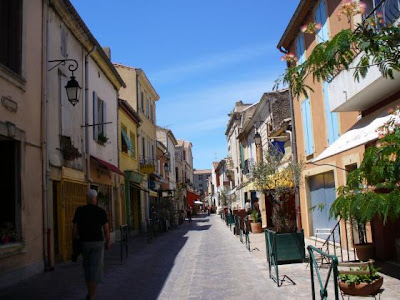 After a brief stay in what can only be described as a micro-Versailles (…14 foot beamed ceilings, floor to ceiling carved panel, stone and marble fireplaces, gigantic draped and shuttered windows that open out to a bustling square filled with shops and restaurants) in a prosperous and lively section of Bordeaux, I’m now sitting in the lobby of a hotel across the street from a large old vineyard, another of my wife’s family’s properties, located in a small village just outside of Nantes.

This has me thinking that although most of the American Melting Pot’s immigrants likely had good reason to come to the U.S., those that completely cut ties with the old country left behind some damn nice real estate.

I suppose an extended stay in France (or any country in Europe for that matter) provides an opportunity to reflect and to make valuable comparisons to the U.S. … It’s not like this is some remote or exotic corner of the world… We’re nearly all cut from the same cloth… There’s even a large statue of Thomas Jefferson situated on a bank of the Seine… and of course, we have Lady Liberty looking out over New York harbor.

One principle that has clearly been over applied in the U.S. is “Economy of Scale”.

It seems… from the vantage point of a tiny village economy nestled within the Loire-Atlantique (or from Paris for that matter)… that in the U.S. we have cheapened everything, squeezing not just the cost but the value out of nearly all that we consume.

Worse yet… this squeezing of value didn’t just cheapen products and services but labor too.

We have killed the artisan, the tradesman, the handicraft, the small local entrepreneur… about the only local business that appears completely free from franchise forces or a big box pummeling are funeral homes and even for them repeat business is pitiful.

Think of our shoes… I wonder if Americans of the early 1900s could imagine a future in which there would not only be no cordwainers or cobblers but a world where cheap rubber slippers called “Crocks” would be all the rage… you wear them rain or shine and when they get funky… into the dumper.

We threw away our shoes and our cordwainers and cobblers too…

Cheapening a product or service is usually considered an inflationary process because consumers generally pay the same amount for an inferior product…. effectively paying more.

But I can’t help thinking that our many decades long foray into mass production represents a massive deflationary force whereby the value of all things have steadily seeped into the ether along with the production skills and even the knowledge that better things ever existed.

Theoretically, the things we own are all independent stores of value, exchangeable for some amount of something else … like cash, gold or food … yet it appears that all the standardization and mass production and distribution are now giving way to a twisted version of “Moore’s Law” where products are so continually cheapened as to be almost immediately rendered as worthless once taken from the store or the box.

Here in this little village (… or Paris for that matter), the people have less stuff… there’s no doubt about that… but what does that say for their quality of life?

Is a higher standard of living (for everyone) simply having more stuff or more value?
Posted by SoldAtTheTop at 8:05 AM