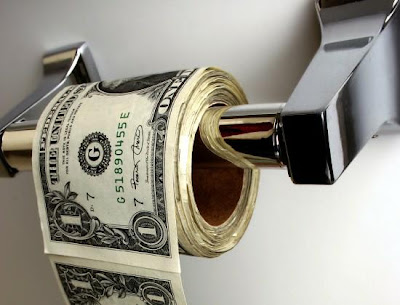 Ahead of tomorrow’s Q2 2009 Productivity and Costs report I thought I would highlight and interesting trend emerging in the manufacturing components that might signal early inflationary pressures.

To make matters worse, real hourly compensation appears to be increasing at the fastest annual rate on record jumping 8.65%.

The combination of plummeting productivity and surging labor costs is working to push the “unit labor costs” into the stratosphere… a possible harbinger of higher consumer prices.

Of course, we have to remember that the American manufacturing sector has looked pretty sickly since 2000 so while these early inflationary signals may serve as an interesting academic exercise, they likely don’t tell the full story.

A more concerning inflationary development that I’ll post on after tomorrow’s Q2 release is that a similar trend of higher real hourly labor costs outstripping gains in hourly productivity appears to be playing out in the more general business sector component…. Though it will be helpful to also reflect on the employment cost index in order to really get a thorough sense of any early inflationary action…. More to come!

The following chart (click for larger dynamic version) shows manufacturing output since 1987 along with the annual percentage change. Notice that after a fairly robust run-up during the 1990s, manufacturing activity weakened notably in the 2000s and since Q3 2008 has been seriously on the ropes.

Also interesting is that fact that during the recessionary periods of the early 1990s and 2000s there were consistent gains in productivity even as the contraction side of the business cycle worked to significantly ebb total hours worked... today though it appears a different trend is playing out.

Next, take a look at manufacturing “output per hour” versus “real compensation per hour” … notice that output has declined on a year-over-year (… green bars) basis now for two quarters … the first annual declines on record.

Also note that “real compensation” (… black bars) is surging at the fastest annual pace on record.

Given that annual gains in real compensation have rarely outstripped gains in hourly output over the last 20+ years what we are seeing today, a combination of surging compensation and declining productivity, is truly unusual.

Finally, looking at the seasonally adjusted manufacturing “unit labor cost” you can see the result today’s unusual dynamics… is unusual increases in general price inflation on the way?

Posted by SoldAtTheTop at 5:10 PM