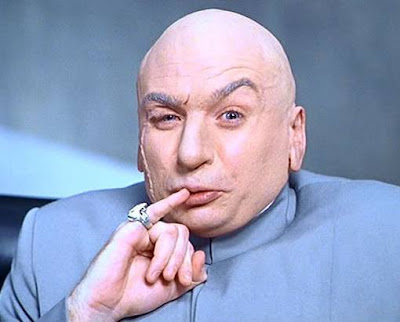 For a few years now there has been a friendly competition of sorts going on between this era’s leading realists.

Peter Schiff, Nouriel Roubini and Marc Faber (… probably others) have all, at times, been referred to publicly as “Dr. Doom”.

Now I’m not suggesting that these “doomers” themselves are responsible for this rivalry, each has simply been tagged with this label by Wall Street types or members of the traditional media.

What’s curious though is to consider the fact that there is no counterpart… no person has been labeled as “Dr. Boom”.

More curious still… we who follow the financial media closely know that there are actual instances of individuals who have been so absurdly and publicly Bullish that they truly deserve the moniker of “Dr. Boom”… Larry Kudlow for one… as well as Brian Wesbury, Mark Perry, Jerry Bowyer, Don Luskin … so lack of a tag for these characters is perplexing.

I’ll tell you why… you are all Dr. Booms… America is a country of Dr. Booms!

There is no need to specifically identify a single Dr. Boom… Doom is a systemic outlier… Boom is the default… if you’re not Boom you’re automatically Doom… and you are in a minority… You’re either with Boom or you’re against Boom!

Though I’m treating it lightly here… there is something profound in this imbalance.

We have not had an “organic” boom since the 1990s (led by the real… albeit overblown… ubiquitous change of the internet and other revolutionary forms of communications) but still… we not only expect it… it’s the “de facto” expectation.

If we are not actively in the throes of a recessionary decline… then… we must be booming!

Although, given the circumstances of the last few years, many gladly welcome this sort of sentiment…. This is not a positive or optimistic sign… it’s a delusional one.
Posted by SoldAtTheTop at 7:45 AM